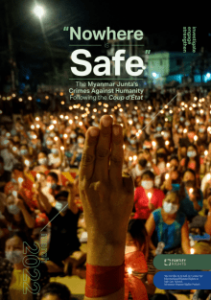 Myanmar’s junta is more than a year old. The vast majority of the country’s people oppose the junta and favor democracy. But the devil is in the details, notes the Walter H. Shorenstein Asia-Pacific Research Center, part of Stanford’s Freeman Spogli Institute for International Studies. Many in the opposition want some form of multi-ethnic federal democracy. But levels of disagreement and distrust among different communities, including some of the Ethnic Armed Groups, are impeding a unified vision to push the military out of power and establish civilian rule.

National Endowment for Democracy (NED) partner Fortify Rights joined with the Schell Center at Yale Law School to publish a new 193-page report, “Nowhere is Safe”: The Myanmar Junta’s Crimes Against Humanity Following the Coup d’État, to detail the first six months of the Myanmar military’s post-coup violence, drawing on on leaked information and more than 120 interviews with eyewitnesses, survivors, active-duty military personnel and deserters, as well as more than 1,000 data points of open-source information.

Myanmar’s Future: What Should Be Done? This webinar will examine the choices and challenges faced by the opponents of the regime as they try to unite these communities against it on behalf of a better future for Myanmar.