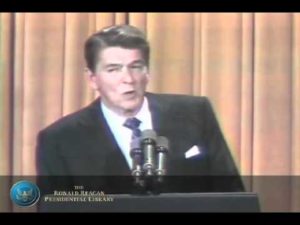 Today, sophisticates on both the political Left and Right argue that the United States has no business supporting the democratic aspirations of the Venezuelan people, or that Iraqis were somehow better off living under Saddam Hussein’s police state, or that people in China don’t care about political liberty because they enjoy the economic kind, notes Daniel Twining, the President of the International Republican Institute. Ronald Reagan would tell them that they are wrong, and rightly accuse them of “cultural condescension.” The fate of free peoples is linked, and America is safer and more secure when it supports the aspirations for liberty of people beyond its borders, he writes for the American Interest:*

Such sentiments find endorsement from the business community, judging by a U.S. Chamber of Commerce letter to Congress which strongly supports recent moves in Congress to enhance funding for the National Endowment for Democracy (NED) and its four core institutes —the International Republican Institute, the National Democratic Institute for International Affairs, the Solidarity Center, and the Center for International Private Enterprise, the Chamber’s non-profit affiliate.

“Given the proliferating challenges to democratic norms posed by malign actors in several parts of the world, the increased support for NED programs endorsed by the Senate Appropriations Committee is appropriate, and the Chamber urges the House to support this robust level of funding,” the Chamber states, not least because of NED’s “cost-effective investments that advance U.S. national and economic interests.” 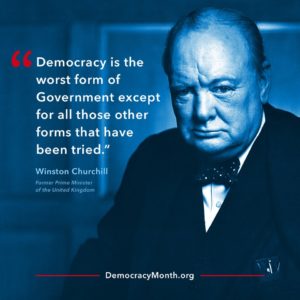 At least 59 US Senators have joined the American Democracy Month Council effort to promote National Democracy Month and reengage citizens by posting the famous quote by Winston Churchill below, which was spoken 72 years ago on Monday, November 11.

As authoritarian revisionist powers like China and Russia pursue policies to divide democracies and weaken allied solidarity; their focus on undercutting cooperation among democracies is another reminder of its strategic value, since American competitors consider it a challenge to their interests, IRI’s Twining adds.

Which is why it’s pretty shameful that democratic members of ASEAN, or the Association of Southeast Asian Nations, are demonstrating solidarity not with Cambodia’s beleaguered democrats, but instead blocking opposition politicians who are trying to return home to confront Prime Minister Hun Sen of Cambodia, Asia’s longest-serving authoritarian leader, the New York Times reports. 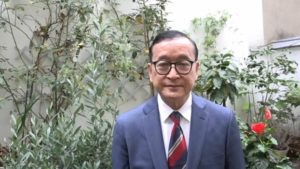 “There seems to be a conspiracy within ASEAN to bend over backward to support an unpopular dictatorship in Cambodia,” said Charles Santiago, a Malaysian legislator and chairman of the ASEAN Parliamentarians for Human Rights. “This is happening because some of the ASEAN countries have also denied a legitimate opposition from functioning in their own countries.

“After banning the opposition and staging sham trials to convict Sam Rainsy, now Prime Minister Hun Sen is blocking Rainsy’s return to the country,” said Brad Adams, Asia director at Human Rights Watch. “This is the culmination of three months of aggressive harassment, arrests, and attacks on the CNRP and its members, which is really about preventing the restoration of multi-party democracy in Cambodia.”

*This is the second in a series of three essays, commissioned by the Ronald Reagan Presidential Foundation and Institute, examining the legacy of Reagan’s Westminster Speech and its relevance for democracy promotion today. Read the first installment by the National Endowment for Democracy’s Carl Gershman here. Coming Friday: a contribution by Richard Fontaine.