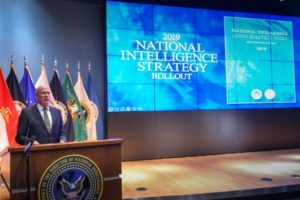 The United States will be challenged in coming years by nations that exploit “the weakening of the post-WWII international order and dominance of Western democratic ideals” and “increasingly isolationist tendencies in the West,” according to a new intelligence document published Tuesday, The Washington Post reports:

The National Intelligence Strategy cited Russia as seeking to flex its geopolitical muscle in order to challenge the United States “in multiple regions”…. The warning of increased isolationism comes as decades-old alliances among Western nations are strained and waves of nationalism are upsetting long-held assumptions about the stability of democratic governments.

“Traditional adversaries will continue attempts to gain and assert influence, taking advantage of changing conditions in the international environment—including the weakening of the post-WWII international order and dominance of Western democratic ideals, increasingly isolationist tendencies in the West, and shifts in the global economy,” the strategy states. “These adversaries pose challenges within traditional, non-traditional, hybrid, and asymmetric military, economic, and political spheres.”

Russia’s strategic objective is not to obliterate the West, but to contain and constrain it with divide-and-rule tactics, using the next generation of weapons in non-kinetic, non-military warfare, CEPA’s Edward Lucas adds:

One new danger hurtling towards us is “deepfakes” – audio and video material created by software which depicts real-life people saying and doing things that they have never done or said. … Deepfakes could be used to make a politicia

n seem ridiculous or reprehensible—or to issue an order to surrender.

A second, related danger is the use of Artificial Intelligence (AI) and machine learning to create lifelike electronic interactions…. A deluge of lifelike phone calls, texts, and social-media messages could be used to dismay or distract voters, or to shape their opinions.

A third new tactic is “super-doxxing” – the use of online intimidation to silence critics. Doxxing is not new, but the resources of a nation-state’s human and electronic intelligence service could make it far more unpleasant and effective. This could take the form of leaking private information, exploiting weaknesses or potential embarrassments in the individual’s personal life. ….

The fourth tactic to watch for is intensified use of alienated social groups. As social trust and public confidence wane in western societies, the potential for division and upheaval grows. Russian links with protest movements, vigilante groups, and other social or cultural organizations have been observed in many European countries. The aim may be to politicize them or to use them for subversive means. 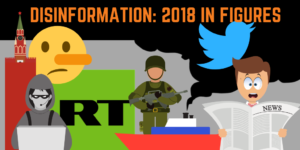 “Advances in communications and the democratization of other technologies have also generated an ability to create and share vast and exponentially growing amounts of information farther and faster than ever before,” the Intelligence Strategy adds:

This abundance of data provides significant opportunities for the IC, including new avenues for collection and the potential for greater insight, but it also challenges the IC’s ability to collect, process, evaluate, and analyze such enormous volumes of data quickly enough to provide relevant and useful insight to its customers. These advances in communications and the democratization of other technologies have empowered non-state actors and will continue to exponentially expand the potential to influence people and events, both domestically and globally.

In a speech to officials on Tuesday, the director of national intelligence Dan Coats said the new strategy urges the agencies to better use advanced technology to improve the tools that analysts and operatives use, The Times adds.

The ability of individuals and groups to have a larger impact than ever before—politically, militarily, economically, and ideologically—is undermining traditional institutions,” the strategy states: 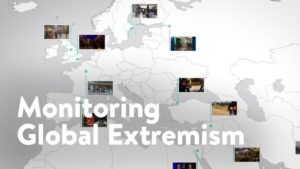 This empowerment of groups and individuals is increasing the influence of ethnic, religious, and other sources of identity, changing the nature of conflict, and challenging the ability of traditional governments to satisfy the increasing demands of their populations, increasing the potential for greater instability. Some violent extremist groups will continue to take advantage of these sources and drivers of instability to hold territory, further insurgencies, plan external attacks, and inspire followers to launch attacks wherever they are around the world.

“Cyber threats are already challenging public confidence in our global institutions, governance, and norms, while imposing numerous economic costs domestically and globally. As the cyber capabilities of our adversaries grow, they will pose increasing threats to U.S. security, including critical infrastructure, public health and safety, economic prosperity, and stability,” the report states. RTWT