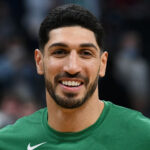 China is increasingly taking the lead in the ideological confrontation with the US over democracy and human rights, with Russia tacitly showing its conformity to Beijing’s philosophy, notes Ahmed Aboudouh, a nonresident fellow with the Atlantic Council. And MENA’s autocrats are drawing lessons from the new authoritarian playbook.

Was the Chinese Communist Party (CCP) successful in leveraging the Games to burnish its image and “discourse power” on the global stage? the National Endowment for Democracy (NED) asks. Or did a series of diplomatic boycotts prompted by Chinese authorities’ human rights abuses make a difference?

A cross-regional coalition of 25 human rights organizations has announced that its prestigious international human rights award will go this year to Enes Kanter Freedom (above), a NBA athlete and activist currently risking his career for speaking out against China’s persecution of ethnic Uyghurs, United Nations Watch reports.

Freedom will receive the Geneva Summit’s 2022 Courage Award at a ceremony on Wednesday, April 6th, 2022, where he will address UN ambassadors, human rights activists and journalists from around the world attending the 14th annual Geneva Summit for Human Rights and Democracy,

Freedom was chosen for his “heroic efforts to sound the alarm on China’s brutal human rights abuses,” said Hillel Neuer, the executive director of United Nations Watch, a co-organizer of the conference together with Liberal International, Human Rights Foundation, and over 20 other human rights groups. 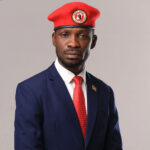 The conference will be held on the heels of the 2022 opening session of the UN Human Rights Council, which includes such authoritarian rights violators as China, Cuba, Russia and Venezuela among its members. Speakers include such human rights and civil society activists as Areej al-Sadhan, sister to Saudi aid worker disappeared for his satirical tweets; Berta Valle, wife to Nicaraguan presidential candidate forcibly disappeared by the regime; Bobi Wine (right), Ugandan pop-star turned presidential candidate and opposition leader; Hamlet Lavastida, Cuban artist imprisoned for an idea in the infamous Villa Marista; Leonid Volkov, Russian opposition activist and Chief of Staff to Alexei Navalny; and Irwin Cotler, former Canadian Justice Minister and advocate for political prisoners. Further speakers here.

Videos of past speaker testimonies are available at www.genevasummit.org. Admission to the April 6 summit is free and open to the public, but registration is mandatory. The conference will also be available via live webcast.