An award-winning Cuban dissident who was detained this week announced Thursday that he has been released without charge but barred from a planned trip to Europe for a meeting on human rights, AFP reports:

Guillermo Farinas, a 58-year-old psychologist, is a leading voice in the opposition to Cuba’s communist government and won the European Parliament’s Sakharov human rights prize in 2010. Farinas was arrested Tuesday in the central city of Santa Clara, where he lives, as he planned to go to the Spanish Embassy in Havana to pick up travel documents.

Cuban authorities prevented a delegation of activists from leaving the island, holding them at Havana airport. Despite an EU-Cuba agreement which was signed back in 2016, they say Europe isn’t supporting the human rights of Cuban citizens, euronews adds:

Among the guests was Rosa María Paya, daughter of the famous Cuban activist Osvaldo Payá, who died eight years ago in an accident. He had received an award from the European Parliament for freedom of thought.

“The moment I return to my country, I don’t know if they will let me in, out, or if I will go directly to prison. José Daniel Ferrer, leader of the largest opposition movement is in prison, and also the leader of the campaign we are defending,” said Paya. 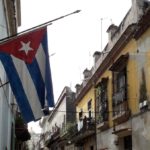 The Committee for the Protection of Journalists highlights the case of Cuban journalist Luz Escobar, who has been repeatedly barred from leaving her home by authorities.

Marti Noticias this past week released the documentary Trago Amago (Bitter Drink) directed by Joe Cardona and Magdiel Aspillaga, narrated by journalist Oscar Haza and produced by Radio Televisión Martí, the Center for a Free Cuba adds. Each time dictatorship arose in Cuba under Machado, Batista and Castro the Bacardis joined the democratic resistance. They have recognized the work of Oswaldo Payá Sardiñas, and in 2017 that of his daughter, Rosa María Payá and they are supporting the Cuba Decide initiative to push for a democratic transition.