Hungary is reportedly the only EU member not to have been invited to president Joe Biden’s “summit for democracy” later this year, which is quite right, for Hungary is now not a democracy, notes Oxford University’s Timothy Garton Ash. It is a hybrid regime, somewhere between democracy and dictatorship, which is constrained but also sustained by the country’s membership of the EU. Describing Fidesz’s large, effective propaganda machine, one leading independent journalist told me: “Orbán built this machine on EU money,” he writes for the Guardian:

There is extensive evidence of the misuse of EU funds in Hungary, including reports from the EU’s own anti-fraud office. …. Everyone knows this, but European politicians have been loth to say it out loud. ….A particular responsibility falls on the new German government. Germany, although itself a model liberal democracy, has alas been an enabler of the erosion of democracy in Hungary over the last decade. A change of government in Berlin is the perfect moment for a change of message and tone…. After all, it is German taxpayers’ money that is being misused by the demokratura on the Danube.

But rights advocates are questioning whether the Summit for Democracy can push those world leaders who are invited, some accused of harboring authoritarian tendencies, to take meaningful action, Reuters adds.

“If the summit is to be anything more than just another meeting, each attendee, including the United States, will need to follow through on meaningful commitments on democracy and rights issues in the year ahead,” said Annie Boyajian, vice president for policy and advocacy at Freedom House, a non-profit group specializing in human rights and democracy.

The Lithuanian Foreign Ministry organized the Forum on 19-20 November 2021, to address the “worrying trends of contracting democratic space and authoritarian entrenchment.” Participants – including foreign ministers, civil society and democracy activists, academia, and free media representatives from around the globe – will aim to produce concrete measures to help democracies build resilience to authoritarianism and renew democratic cooperation. The Forum is designed to support of the upcoming Summit for Democracy scheduled for 9-10 December 2021.  Full details here.

The details of governments invited to the much-touted Summit for Democracy has not been made public, although POLITICO managed to obtain a list of invitees.

Kosovo’s political parties have been trading blame over the lack of an invitation to the US-led Summit of Democracy scheduled for December, EURACTIV reports. Kosovo, Serbia, and Bosnia and Herzegovina have not been invited. The Kosovo opposition immediately blamed the ruling party for the snub and increasingly cold relations with the US. 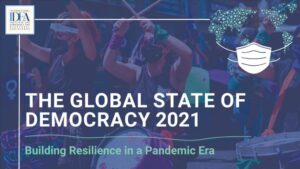 Rights groups say the invitation to countries with problematic human rights records raises doubts about the credibility of the event, but at the same time illustrates the administration’s struggle to balance wider U.S. national security interests, such as countering a rising China, with higher ideals, Reuters adds.

“Clearly, strategic considerations about countering China are at play in inviting very troubled, backsliding democracies like India and the Philippines that are in China’s neighborhood,” said Amy Hawthorne, research director at the Project on Middle East Democracy, an advocacy group supported by the National Endowment for Democracy (NED).