In choosing Iraqi Yazidi activist Nadia Murad and gynaecologist Dr. Denis Mukwege as recipients for this year’s Nobel Peace Prize, the Norwegian Nobel Committee has further highlighted the importance of addressing sexual violence to achieving international peace and security, notes Susan Hutchinson, a scholar at the Australian National University. Sexual violence is an indicator of increasing armed violence, a driver of armed conflict, and a barrier to peace and reconciliation, she writes for The Strategist:

For example, research by Jacqui True and Sara Davies has shown that in Myanmar, from 1998 to 2016, reports of sexual violence increased a year before a spike in armed conflict. Sexual violence has long been used as a weapon of war in Myanmar and has been used as a tool of genocide in the recent violence against Rohingya Muslims in the northwest of the country. 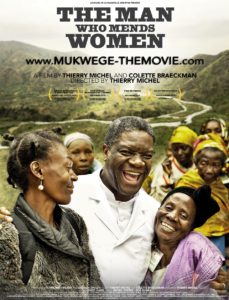 Kidnapping, trafficking and sexual slavery are sources of finance and recruitment for extremist groups all over the world. Indeed, it is estimated Islamic State made tens of millions of dollars annually in the slave market. In 2016, the UN Security Council passed resolution 2331 condemning human trafficking in areas of armed conflict, saying that it can ‘exacerbate conflict and foster insecurity and instability’ and drawing attention to the trafficking perpetrated by Boko Haram, al-Shabaab, al-Qaeda and the Lord’s Resistance Army.

The National Endowment for Democracy (NED) congratulated Dr. Mukwege, a longtime partner and founder of the Panzi Hospital in the Democratic Republic of Congo (DRC), Dr. Mukwege made it his mission to treat the horrific injuries suffered by thousands of women who were victims of violent rape by the combatants in the protracted and brutal war in Eastern Congo.

In 2014, to amplify the need for justice and security sector reform in the DRC, NED made a grant to help fund a documentary about Dr. Mukwege’s heroic work. “The Man who Mends Women,” was an award-winning film by director Thierry Michele and Collette Brackeman. Screened throughout Congo and internationally, including the United Nations, the House of Commons, and the European Parliament, the film raised awareness of atrocities committed by the Congolese army and armed groups against women in Eastern Congo and highlighted Dr. Mukwege’s achievements through his work to empower victims of sexual violence.

“Denis Mukwege is a model of courage and compassion, attributes that are sorely needed in today’s world,” said NED President Carl Gershman. “We congratulate and thank him for his work.”

Nadia Murad became world-renowned for speaking up about the horrors she endured at the hands of the Islamic State, adds Maiya Moncino, a research associate in international economics at the Council on Foreign Relations:

A Yazidi woman from Iraq, Murad was abducted by the terrorist group, while her mother and six of her brothers were murdered. Murad was kept as a sex slave in Mosul, until she was able to escape three months later. Since then, she has been an activist for the Yazidi people, bringing awareness to and fighting against the use of sexual violence as a weapon of war. In 2016, she was appointed UN Goodwill Ambassador for the Dignity of Survivors of Human Trafficking. RTWT