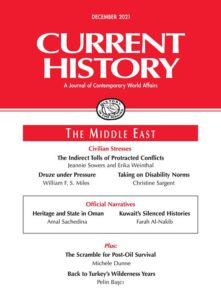 A collapse of Tunisia’s democratic experiment would be unfortunate for its citizens and all of MENA, which badly needs new political models, Carnegie’s Michele Dunne observes. But such a failure is unlikely to signal an enduring return to the region’s political status quo ante. As signs of the end of oil proliferate, more efforts to find alternatives to authoritarian rentierism can be expected, she writes in As Oil Is Waning, the Times Are Changing, an article for Current History:

What was once a regional race to develop oil and gas is transforming into a race to secure foreign backing and acquire the means of technical and physical coercion. Although dispiriting, this is more a symptom of change than the substance of change itself. Countries that were rich in oil or gas will eventually cease to dominate their neighbors, and it is not clear how far their investments abroad and sovereign wealth funds will carry them. Countries rich in human resources may well become relatively more powerful in the post-oil era. The advantage will go to those whose governments treat their citizens as assets to be cultivated rather than threats to be contained.

With the future of fossil fuels looking bleak, resource-dependent regional powers are competing for other means of securing their positions, adds Dunne, a board member of the National Endowment for Democracy (NED). While some are striking new alliances—even with Israel— they are also redoubling efforts to stamp out democratic voices at home and abroad. RTWT