In the latest issue of The Atlantic, George Packer, Anne Applebaum, and Franklin Foer tell the story of life on the front lines of democracy as Ukrainians (and their neighbors) rally to save their nation and defend democratic values.

“I told myself and others that Ukraine is the most important story of our time, that everything we should care about is on the line there,” Packer writes in “On Democracy’s Front Lines.” Ordinary citizens are mobilizing as a national community, risking their lives to defend their young democracy, offering “a model of what we all believe to be good and want for ourselves—courage and freedom and unity.”

Applebaum embeds with a band of volunteer fighters from Belarus who are taking up arms in Ukraine in the hopes of bringing change to their own country. The men of the Kalinouski Regiment that she meets are young, in their 20s and 30s, some with careers in computer programming, and options other than fighting in Ukraine’s war. But they have volunteered for the fight because they sympathize with Ukraine’s democratic cause and because they hope, eventually, to liberate Belarus from the dictatorship of Alexander Lukashenko, who has been in power for nearly three decades.

The men of the Kalinouski Regiment, Applebaum writes, “believe that if they lean hard on the scales of history and help the Ukrainians win, then both Russia and its Belarusian satrap will be far weaker. They could pay a high price—not just with their time and effort but with their lives … But if they don’t fight, they might pay another kind of price: If Ukraine loses and Russia is empowered, then Belarus will remain a dictatorship, and they will never be able to go home.” 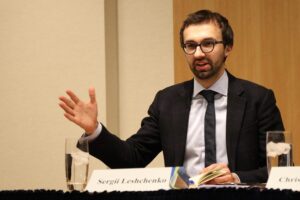 The journalist Sergii Leshchenko (left) has a knack for inserting himself into the pivotal moments of Ukraine’s history. His reporting helped lead to the demise of the Russian-backed kleptocrat Viktor Yanukovych and he eventually won a seat in Parliament, writes Foer:

When Russia attacked, Leshchenko [a Journal of Democracy contributor] who had been appointed to the board of Ukraine’s national railway, packed a backpack and joined a small band of executives attempting to keep the trains running as Russian soldiers poured across the borders. He witnessed—and played a role in—a remarkable effort that allowed a nation under attack to move citizens to safety.

“I wanted to see the war through his eyes,” Foer writes, “to understand how the country had survived the Russian onslaught—and whether the war had changed the trajectory of Ukraine’s still nascent democracy.” RTWT