“There are very distinct parallels. And I think Putin has probably overstretched himself in the same way that Nicholas I did,” says Orlando Figes, a British historian and the author of The Crimean War: A History. 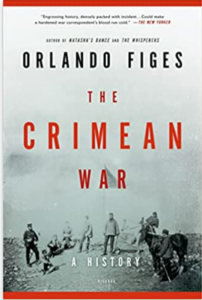 “Nicholas, who wanted to counteract the influence of liberal democracy in Europe, came up with the slogan, ‘Orthodoxy, autocracy, nationalism,'” Figes says. “That might just as well stand for Putin’s ideology. This is a war backed by the Orthodox Church. He is an autocrat. He sees himself as a bulwark against liberal principles coming from the West.”

Professor Vladislav Zubok, a Russian historian at the London School of Economics, has a similar take, Myre adds. “It’s a classic case when history does definitely rhyme,” says Zubok. RTWT

The Maidan’s democratic protests “catalyzed the development of a strong civil society in Ukraine,” said Amb. Melanne Verveer. “Putin’s response to this outpouring of citizen activism was to seize Crimea and shortly thereafter invade Ukraine in the east before launching a full-scale war on Ukraine,” she told a forum (above) on Crimea at the National Endowment for Democracy (NED). 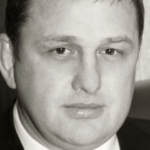 Rights activists and journalists journalists such as Vladyslav Yesypenko (right) have been targeted by a methodical campaign to crush independent media and freedom of expression, said NED President and CEO Damon Wilson.

Putin is employing the same playbook in Ukraine as it did in Crimea, repressing pro-democracy forces, said Maria Tomak, Head of the Crimea Platform Department at the Mission of the President of Ukraine in Crimea. Russia deliberately “targets civil activists, journalists and others who support democracy.” Consequently, it’s vital to understand that “it’s not only about Russia fighting for territory, it’s Russia fighting against the liberal democratic world.” 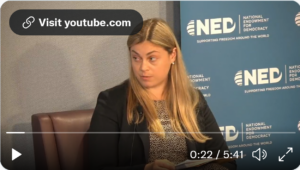 The 2014 occupation of Crimea “was not the choice of the people. It was a military operation by Russia. The people did not choose to be a military base for Russia.” There is no issue as “sensitive” to the Kremlin agenda as Crimea as it is central to Putin’s imperialist mythology, said Tomak (left).

The war in Ukraine “didn’t start this year, but eight years ago with the occupation of Crimea,” said Tamila Tasheva, co-founder of the human rights NGO Crimea SOS, aka KrymSOS. Over the past eight years, the Russian Federation colonized Crimea. What we see now is more persecution of Crimean Tatars being labeled as extremists and terrorists.” 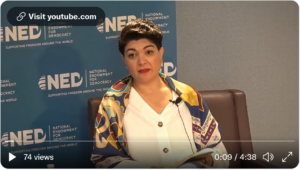 Russia used Crimea as a launching pad to attack Ukraine and specifically to occupy Kherson, said Tasheva (right). It has now become “a gray zone” which is why it’s imperative to maintain communications and to highlight the fate of the Crimean Tartars.

Family and friends of a prominent Ukrainian human rights campaigner taken prisoner by Russia while fighting in eastern Ukraine have told of their fears for his safety, Daniel Trilling, Kateryna Semchuk and Valeria Costa-Kostritsky write for Open Democracy. 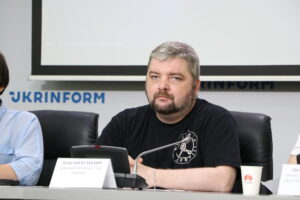 Maksym Butkevych (above), the co-founder of several organizations including the ZMINA human rights center, Hromadske Radio and the No Borders Project, was captured in June near Hirske in the Luhansk region. 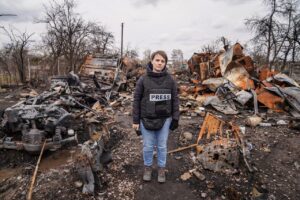 “For the last three or four years, quite a lot of discussion and funds were put into the idea and condition that media should be sustainable,” said Nataliya Gumenyuk (right), award-winning journalist and founder of the Public Interest Journalism Lab (PIJL)  “Instead of a lot of great journalism covering war and sensitive issues, an incredible amount of the donors’ money was put into mediocre marketing managers to play the game as if they are commercially viable.”

.@MelanneVerveer kicks off #Crimea event at @NEDemocracy with @T_Tasheva & @MariaTomak: “in the beginning, it was Crimea.” Today’s horrific war began in Crimea 8 years ago. Now Moscow is stepping up persecutions of Crimea’s indigenous people and anti-war activists. pic.twitter.com/9TLIrONvrR