Gulalai Ismail is one of Pakistan’s best-known women’s rights crusaders, speaking out about forced marriages, gang rapes and crushed dreams. Her groundbreaking work has carried her around the world, winning her awards and audiences with high-powered women such as Michelle Obama and Queen Elizabeth II. But in her own country, Ms. Ismail has become an enemy of the state, accused of inciting rebellion. And now she is on the run, The New York Times reports:

For two months, practically no one has seen her. Pakistan’s security services, known as among this region’s most cunning and brutal, can’t find her. They have raided her house several times and deployed scores of officers, and, according to Ms. Ismail’s family, abducted and tortured family friends to extract information…. 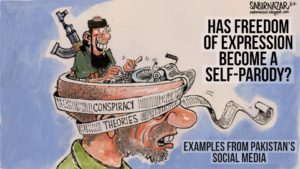 When she was around 16, a female cousin who dreamed of becoming a pilot was married off to a man nearly twice her age, abruptly ending her education — and her dreams. That motivated Ms. Ismail to start an advocacy group, Aware Girls, that has trained thousands of young Pakistani women about their rights. One was later shot in the head: Malala Yousafzai, whose resilience has inspired millions. RTWT

A recipient of the National Endowment for Democracy’s 2013 Democracy Award, the Fondation Chirac Peace Prize, the International Humanist of the Year Award, the Commonwealth Youth Award for Excellence in Democracy, and the Anna Politkovskaya Award, Gulalai is also a Board Member of the Women’s Global Network for Reproductive Rights and a member of the Asian Democracy Network.