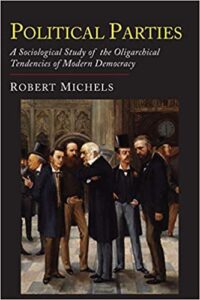 In 1911, Robert Michels (1876-1936), an Italian political sociologist, published “Political Parties: A Sociological Study of the Oligarchical Tendencies of Modern Democracy,” postulating the “iron law of oligarchy.” Michels, who sometimes used “oligarchy” and “aristocracy” interchangeably, argued that no democracy can avoid oligarchies because of human nature and the nature of parties, George F. Will writes for The Post:

Ghia Nodia, a political scientist in Tbilisi, Georgia, says populism is not an ideology but an “attitude,” a resentment arising from the alleged appropriation by elites of the power of the people. Writing about Michels in the January edition of the National Endowment for Democracy’s Journal of Democracy, Nodia says that the careless unrealism of the common description of democracy guarantees an increasing tempo and intensity of populist dissatisfactions with democracy.

Democracy presupposes an impossibility: “the people” being in charge. Michels, writes Nodia, considered the masses naturally passive and predisposed to accept decisions made by the few people with the interests and skills to participate directly in politics and governance. And the principle of representation — the people do not decide issues, they decide who will decide — inevitably opens what Nodia calls a “mental and cultural gap between the rulers and the ruled.” Hence a “democratic deficit” is inherent in democracy. 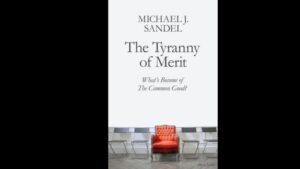 Populism also breeds on the resentments caused by meritocratic elitism, argues Harvard University’s Michael J. Sandel, the author of the forthcoming “The Tyranny of Merit: What’s Become of the Common Good?” Building a politics around the idea that a college degree is a precondition for dignified work and social esteem has a corrosive effect on democratic life. It devalues the contributions of those without a diploma, fuels prejudice against less-educated members of society, effectively excludes most working people from elective government and provokes political backlash, he writes for The Times:

The credentialist prejudice is a symptom of meritocratic hubris. By 2016, many working people chafed at the sense that well-schooled elites looked down on them with condescension. This complaint was not without warrant. Survey research bears out what many working-class voters intuit: At a time when racism and sexism are out of favor (discredited though not eliminated), credentialism is the last acceptable prejudice. 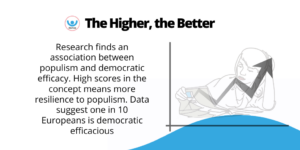 Citizens’ democratic efficacy – a blend of political skills, knowledge and attitudes – is negatively associated with populism, according to the DEMOS think-tank. New research by the H2020 project found that citizens with high scores in all components of democratic efficacy believe they can influence politics, trust the responsiveness of politics and are well informed. They have political skills and hold liberal values so they are less likely to agree with populist statements or adopt populist attitudes, and are better prepared to resist populist narratives:

* The higher the levels of democratic efficacy, the less prone a citizen is to agree with populist statements.

* Western democracies score the highest in democratic efficacy, while Central and Eastern European countries such as Poland score the lowest.

Stanford’s Francis Fukuyama, also writing in January’s Journal of Democracy, says that after the upheavals of 1989-1991, “the former ‘captive nations’ embraced the democratic part of liberal democracy, but not necessarily the liberal part. . . . The result was the emergence of illiberal democracy in places such as Hungary and Poland.” Illiberal democracy is a species of dictatorship, The Post’s Will adds:

In the United States, illiberal democracy, seeping from campuses, is abetted by a technological disappointment — the failure of the Internet and social media to be instruments of enlightenment. Martin Gurri, writing in the Manhattan Institute’s City Journal, says “the information sphere today contains an immense universe of voices interested in talking about ever-fewer subjects.” It “has taken on the traits of an obsessive-compulsive personality; its fixations, always mistaken for public opinion, will wander again, leaving would-be revolutionaries baffled and outraged.” RTWT