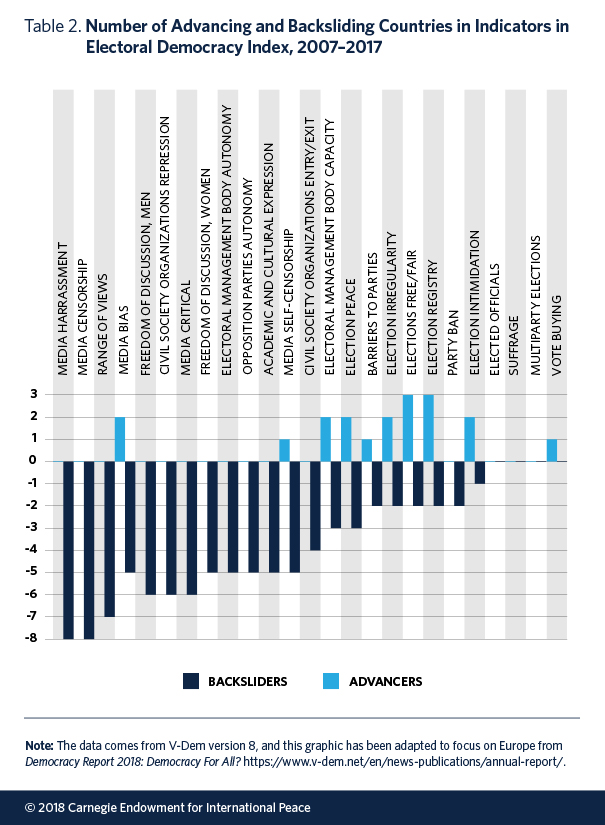 Although it is commonly assumed that democratic backsliding starts with electoral problems, other political elements—such as the infringement of individual rights and the freedom of expression—are at the core of Europe’s democratic woes, argues Staffan Lindberg, the director of the Varieties of Democracy (V-Dem) Institute and professor of political science at the University of Gothenburg. 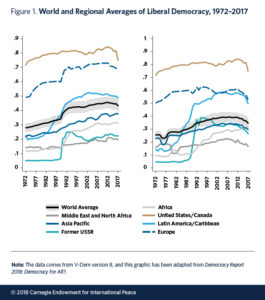 It is important to recognize that the “democraticness” of European society is under strain, he writes for Carnegie Europe:

V-Dem’s 2017 democracy report concluded that democracy still seems relatively resilient.5 This year, the assessment is more pessimistic. Democracy is being rolled back. A trend of autocratization is evident. The starkest difference from last year is the number of very large and powerful nations that are now part of the autocratization wave, affecting billions of people and sending a very strong signal to the rest of the world.

In an interview and email conversations, Bannon and Raheem Kassam, a former chief aide to British anti-EU leader Nigel Farage who now serves as a Bannon lieutenant, said the group, known as The Movement, is already operating and hiring.

“The Movement will be our clearing house for the populist, nationalist movement in Europe. We’re focusing attention on assisting individuals or groups concerned with the matters of sovereignty, border control, jobs, amongst other things,” Kassam said. “We decided to headquarter out of Brussels because it is the heart of the European Union — the most pernicious force against nation state democracy in the West today.”

Bannon described the organization he was creating as a “populist project” intended to touch off a “tectonic plate shift in Europe.

While one German minister attacked Bannon’s “hatred and lies”, some populist figures in Europe were unimpressed with the idea of an American vowing publicly to unite them from a Brussels headquarters, the BBC adds. In the words of European studies specialist Alexander Clarkson, “most of these parties are set on anti-Americanism“.

Bannon described his plan to create a right-leaning foundation called “The Movement” to The Daily Beast, says NPR, adding that The Movement will serve as the right-wing equivalent of George Soros’ Open Society.

The market may be tougher than Bannon realizes, says Bloomberg analyst Leonid Bershidsky. The elections are not winner-take-all like in the U.S., and nationalist and populist parties are scattered through four political groups in the European parliament.

Defenders of liberal democracy must debate the populists not to change the populists’ minds, but to make the public understand what each party really stands for, not simply against, says Helmut K. Anheier,

president and professor of Sociology at the Hertie School of Governance in Berlin, citing the public confrontation between Ralf Dahrendorf, a member of the Free Democratic Party, and the radical left-wing student leader Rudi Dutschke.

Yes, this could mean giving populists more airtime, and it risks normalising extreme views. But the threats associated with an aggressively polarised public sphere, one that extremists have proved adept at exploiting, are much greater, he writes for Project Syndicate.