Italians registered their dismay with the European political establishment on Sunday, handing a majority of votes in a national election to hard-right and populist forces that ran a campaign fueled by anti-immigrant anger, The New York Times reports:

The election, the first in five years, was widely seen as a bellwether of the strength of populists on the continent and how far they might advance into the mainstream. The answer was far, very far. After Chancellor Angela Merkel of Germany and President Emmanuel Macron of France beat back populist and far-right insurgencies in the past year, Europe had seemed to be enjoying a reprieve from the forces threatening its unity and values. That turned out to be short lived.

The country had been “split in two” between traditional establishment voters on the right and left, and everyone else, said Nadia Urbinati, a political theorist at Columbia University and the author of the forthcoming book “The Age of Populism.”

Populist uprisings could bring down liberal democracy, argues Harvard University’s Yascha Mounk, the author of The People vs. Democracy: Why Our Freedom Is in Danger and How to Save It (2018). Authoritarians are on the rise, and electorates are seduced by extremes. To fight back, mainstream politicians need to grasp the causes of popular discontent and rebuild democracy’s moral foundations, he writes for The Guardian:

Citizens are less committed to democracy than they once were; while more than two-thirds of older Americans say that it is essential to them to live in a democracy, for example, less than a third of younger Americans do. They are also more open to authoritarian alternatives; two decades ago, for example, 25% of Britons said that they liked the idea of “a strongman ruler who does not have to bother with parliament and elections”; today, 50% of them do. And these attitudes are increasingly reflected in our politics: from Great Britain to the US, and from Germany to Hungary, respect for democratic rules and norms has precipitously declined. No longer the only game in town, democracy is now deconsolidating. 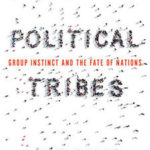 A lot of this discontent is driven by economic concerns, but the form it takes is cultural or racial, he tells Vox:

We have to recognize that we’re in the middle of a unique historical experiment: We’ve never managed to transform countries that thought of themselves as being monoethnic and monocultural into multiethnic ones, which is what’s happening in Europe and, to a lesser degree, in the United States. Some of these countries were always multiethnic, but they also had a clear racial hierarchy in which some people had advantages over others.

“For 20 years, I’ve been studying political tribalism. All over the world, tribal dynamics do much more to shape politics and roil democracy than most of the ideas and grand principles to which we pay lip service,” she writes for POLITICO.

“As I argue in my new book, The People vs. Democracy, we will only be able to contain the rise of populism if we ensure that the political system overcomes the very real shortcomings that have fueled it,” adds Mounk (right), a contributor to the National Endowment for Democracy’s Journal of Democracy:

But the project of saving liberal democracy also calls for something more high-minded than wonkish reform. Populists have only been able to celebrate such astounding successes because the moral foundations of our system are far more brittle than we realised. And so anybody who seeks to make a contribution to revitalizing democracy must first help to rebuild it on a more stable ideological footing.