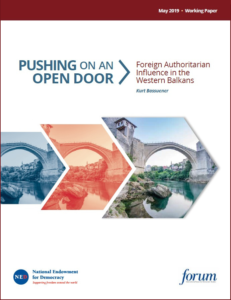 Nearly two decades after the cessation of violent conflict in the Western Balkans and efforts by the international community to support democratic reform, analysis suggests that most countries in the region are losing ground on the rule of law, media freedoms, and democratic accountability more generally. State capture, erosion of independent media, and the growth of corrupt patronage networks are features of this landscape, according to a new working paper, “Pushing on an Open Door: Foreign Authoritarian Influence in the Western Balkans,” authored by Kurt Bassuener, co-founder and senior associate of the Democratization Policy Council (DPC).

Meanwhile, authoritarian powers such as Russia, Turkey, China, and several Persian Gulf states are exerting greater influence in the Western Balkans, with the effect in certain respects of corroding the integrity of democratic institutions. They bring significant economic and political leverage and have focused efforts on developing strong relationships with governments in the region. But their footprint extends to the wider societies through state media initiatives whose narratives intersect with and amplify illiberal narratives, while bolstering unaccountable governance systems throughout the region, says the analysis, from the National Endowment for Democracy’s International Forum for Democratic Studies.

There are a number of innovative ways for international democratic actors to deepen
their engagement and counter illiberal alliances of convenience —including greater coordination on policy and assessment of local partners, Bassuener suggests:

They should demonstrate solidarity with democracy advocates in authoritarian
countries, including by inviting them for gatherings in the Western Balkans and working
to get their message into the local public discourse. They should also take advantage of efforts at democratic renewal within established democracies, which have already captured attention in the region. New lawmakers from places like the United States and Germany—especially those representing the younger generation—could be brought over to engage with Balkan publics.

“These and other such initiatives would convey the message that implementing democratic ideals requires continuous effort, and that those who want accountable governance in the region have many allies in the wider world,” he adds. RTWT