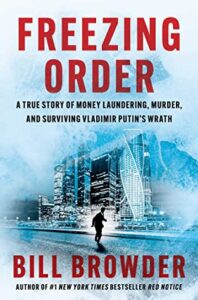 A trillion dollars: That’s how much money famed investor Bill Browder believes Vladimir Putin and Russian oligarchs have stolen from the Russian people since the fall of the Soviet Union, Alexander Nazaryan writes for Yahoo News.

“And that was money that was supposed to be spent on health care and education, roads and services,” Browder said at a Manhattan event to celebrate the publication of his second book, “Freezing Order,” which chronicles how he became a Putin nemesis as a result of his attempts to expose Kremlin corruption. Those efforts led to the death of Browder’s attorney Sergei Magnitsky, who was tortured in a Russian prison and whose name is affixed to sanctions bills passed by Congress.

His life mission is to “get justice for Sergei,” says Browder.

German authorities this week impounded “the world’s largest yacht” for its ties to a Russian oligarch, The Post reports. Germany’s federal police said Tuesday that “through extensive investigations despite offshore concealment,” it found that the yacht is owned by Gulbakhor Ismailova, the sister of Russian billionaire Alisher Usmanov.

Russia’s elite are more accurately referred to as ‘tycoons’ of industry rather than oligarchs because they lack political influence, says Tom Keatinge, the director of financial crimes and security studies at the Royal United Services Institute. The current sanctions against are largely “symbolic” and amount to a “PR exercise,” he told CNN.

As one of the first Western investors to venture into post-communist Russia, Browder was also blunt in his views on the risks of doing business with Russian oligarchs, the billionaires whom he argues are simply trustees for Putin’s wealth and agents of his regime, Institutional Investor adds. These people, he says, have helped make Putin the richest man in the world. Before recent sanctions began to dent the oligarchs’ fortunes, Browder estimated that Putin was worth $200 billion or more.

“You don’t want to take [the oligarchs’] money because if you lose it, they’ll kill you,” is the message Browder relayed to his fellow financiers.

Learning of Magnitsky’s death was “the most heartbreaking, traumatic, and devastating moment of my life,” Browder writes — and a sign of how committed Putin was willing to pursuing perceived enemies of the state.

“Everyone tries to think about Russia as a sovereign state and Putin as a leader acting in national interest,” Browder told Yahoo News, describing that outlook as a fundamental misunderstanding. “You think you can apply political science to Russia. You need to apply criminal science. You need to be a criminologist to understand Russia. People don’t go into government to serve the country. They go into government to steal money.”