Russia has become a kleptocracy under President Vladimir Putin. As a consequence, Russia’s foreign policy has become more aggressive, argues analyst Anders Aslund. Putin has outsourced much of foreign policy to Russian business, allowing the Kremlin to benefit from their entrepreneurial ingenuity, save money and keep a cloak of plausible deniability. The West’s best defense against Russian subversion is to demand full transparency, revealing all dark money, he writes for The Hill (HT:FDD).

Why did Russia’s relations with the West shift from cooperation a few decades ago to a new era of confrontation today? a leading expert asks.

Some explanations focus narrowly on changes in the balance of power in the international system, or trace historic parallels and cultural continuities in Russian international behavior. For a complete understanding of Russian foreign policy today, individuals, ideas, and institutions—President Vladimir Putin, Putinism, and autocracy—must be added to the analysis, notes Stanford University’s Michael McFaul. 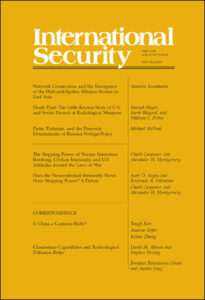 Russian consultants have studied U.S. democracy promotion strategies and organizations to mimic them in the promotion of illiberal, conservative values, he writes in Putin, Putinism, and the Domestic Determinants of Russian Foreign Policy, an article in the latest issue of International Security:

Despite a rhetorical commitment to sovereignty, Putin promotes his ideas inside targeted countries and has won over believers even within democratic countries allied to the United States.  Putin has sought to mobilize other heads of state and populist movements in an effort to impede alleged American imperialism.76 He now seeks to liberate Europeans from the U.S.-controlled NATO, and to weaken the EU.77 Under the guise of championing sovereignty, Putin has defended autocracy abroad and rejected Western democracy promotion.

Current Russian resources for generating soft power are a shadow of the Soviet Union’s ideological appeal. Nevertheless, Russia has reemerged as an influential ideational actor. Putin’s orthodox illiberalism appeals to millions around the world, including heads of states, political parties, religious groups, nongovernmental organizations (NGOs), and individuals, adds McFaul, author of Advancing Democracy Abroad and a former Reagan-Fascell fellow at the National Endowment for Democracy (NED):

To assess how Putin and his ideas, enabled by autocracy, have influenced Russian foreign policy, his article examines three recent case studies of Russian intervention in the domestic affairs of sovereign states: Ukraine in 2014, Syria in 2015, and the United States in 2016. RTWT