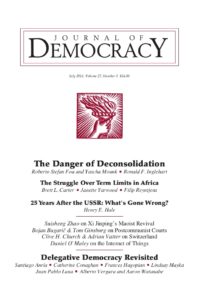 In a thought-provoking opinion article recently published in the New York Times, political scientist David Adler draws on two large-scale public opinion surveys — the World Values Survey (WVS) and the European Values Study (EVS) to posit a remarkable claim: Not extremists but centrists are the most hostile to democracy, notes Matthijs Rooduijn (@mrooduijn), an assistant professor in the department of political science at the University of Amsterdam.

Adler’s analysis refers to the democratic deconsolidation debate launched by Yascha Mounk and Roberto Foa in the National Endowment for Democracy’s Journal of Democracy.

In a thorough analysis, Adler examines the link between where individuals place themselves on the left-right scale and how they assess democracy. But here’s where his analysis goes wrong: How people describe their own left-right position isn’t a very accurate way of distinguishing among those who are in the moderate ideological center and those who are more radical, Rooduijn writes for the Washington Post’s Monkey Cage:

When we look at voting behavior and ideological beliefs, radicals feel it’s less important to live in a democratically governed country and are less satisfied with how their own democracy works than do those in the center…. In other words, citizens with typical radical right attitudes are more skeptical of and dissatisfied with democracy than citizens with more moderate pluralist and multiculturalist beliefs.