President Biden, faced with a range of early foreign policy challenges, was expected to outline his vision for an expansion of multilateral engagement with the world and an emphasis on human rights during a State Department visit Thursday, the Wall Street Journal reports. In his first foreign policy speech as president, Mr. Biden plans to shift from the Trump administration’s “America First” doctrine and emphasize traditional U.S. alliances, according to a senior administration official.

The nation’s democratic values were “pushed to the brink in the last few weeks,” he was due to say, but “the American people will emerge from this stronger, more determined, and better equipped to unite the world in fighting to defend democracy – because we have fought for it ourselves.”

The president was expected to say that by reaching out to leaders of America’s traditional allies—Canada, Mexico, the United Kingdom, Germany, France, NATO, Japan, South Korea, and Australia—early in his term, he had begun “re-forming the habits of cooperation and rebuilding the muscles of democratic alliances that have atrophied from four years of neglect and abuse.”

“We must meet this new moment of accelerating global challenges — from a pandemic to the climate crisis to nuclear proliferation — challenges that will only be solved by nations working together in common cause,” Biden will say, according to excerpts of his speech released by the White House.

“That must start with diplomacy, rooted in America’s most cherished democratic values,” he will say. “Defending freedom, championing opportunity, upholding universal rights, respecting the rule of law, treating every person with dignity.”

One approach would be to create a D-10 group of democracies, a concept devised by the State Department during President George W. Bush’s administration, in which the United States would be joined by Australia, Britain, Canada, France, Germany, Italy, Japan, South Korea and the European Union. Whatever form it takes, supporters of that idea say it would be a distant echo of Mr. Bush’s grand “freedom agenda,” the Times adds.

“This has to be done with complete humility and serious honesty about our shortcomings, and the fact that we are not exporting an American model,” said Thomas Carothers, a senior vice president at the Carnegie Endowment for International Peace.

“I don’t think what he’s talking about is lecturing the world on democracy,” said Gayle Smith, a former National Security Council senior director for development and democracy in the Obama administration.

The question now is if the dramatic events in Myanmar and Russia — all in the first two weeks of his presidency — lead Biden to reconsider democracy promotion as the “watchword” of his foreign policy, Vox’s Alex Ward suggests. If he doesn’t, he risks falling short of his lofty goals. American leaders with high hopes of ushering in a more democratic future inevitably run into the harsh reality of their limitations and the opposing forces working against them.

“Every administration for the last 30 years has struggled with this,” said Erin Snider, an expert on US democracy promotion at Texas A&M University.

“Suddenly in Russia you have a new political environment in which many are looking to see how the world responds, starting with Biden,” said [former NED board member] Stephen Sestanovich (right), who served in several administrations managing Soviet and then Russian affairs.

“Generally, support for democracy is most effective when it merges with a strong internal push inside a country for reform, for freedom,” said Mr. Sestanovich, now a professor at Columbia University’s School of International and Public Affairs. “And we haven’t seen that in Russia in a long time, until now,” he told the Times.

What happens when a country that has made the expansion of democracy the central principle of its foreign policy for generations itself experiences a profound crisis in its own democracy? asks Daniel Strieff, author of ‘Jimmy Carter and the Middle East: The Politics of Presidential Diplomacy’.

As De Tocqueville suggested, democracy’s openness can be antithetical to a sound foreign policy, which frequently depends on closed-door diplomacy, he writes for Chatham House. Still, Biden needs to engage in a robust public education campaign that explains his approach to the world. He should outline the benefits of a successful foreign policy and give Americans a stake in the process. 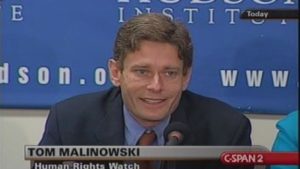 The McCain Institute invites you to join a virtual meeting of the Democracy & Human Rights Working Group (DHRWG) on Thursday, February 18 from 10:00 AM – 11:00 AM EST for a discussion with Congressman Tom Malinowski. He will discuss how the next administration should address the most pressing foreign policy issues through the lens of human rights and democracy.

Congresman Malinowski has represented New Jersey’s 7th district since 2018 and previous served as a Senior Director on President Clinton’s National Security Council and as Assistant Secretary of State for Democracy, Human Rights, and Labor in the Obama Administration. Please find his FULL BIO HERE.

Please RSVP by Monday, February 15 to luke.englebert@asu.edu to receive the live stream link.