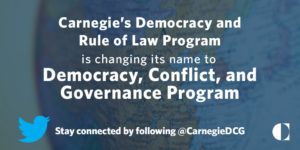 But while the EU is absolutely right to be taking steps to limit the power of the tech giants, it is remiss in neglecting the benefits of digital democracy, she writes for the Reshaping European Democracy project, an initiative of Carnegie’s Democracy, Conflict, and Governance Program and Carnegie Europe.

There are three main ways for the EU to start exploring the potential of digital tools for reshaping European democracy, she adds: