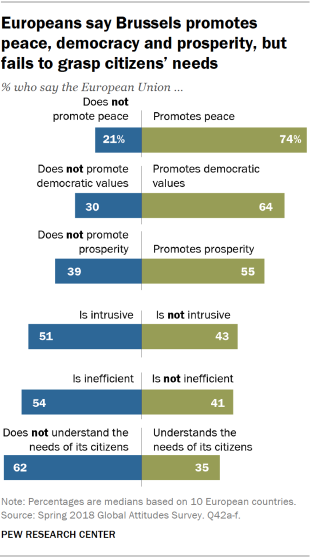 Despite the turmoil associated with events such as the European debt crisis, a massive influx of refugees, and Brexit, Europeans continue to believe the EU stands for noble goals, according to a new Pew Research Center poll:

Across 10 European nations recently surveyed by Pew Research Center, a median of 74% say the EU promotes peace, and most also think it promotes democratic values and prosperity. …. Europeans’ views of the EU remain generally positive after a sharp increase in 2017. Across the 10 European states surveyed, a median of 62% hold a favorable view of the institution.

However, Europeans also tend to describe Brussels as inefficient and intrusive, and in particular they believe the EU is out of touch – a median of 62% say it does not understand the needs of its citizens, Pew adds.

EU member states should be empowered to scrutinize each other’s democratic track record, Germany and Belgium said on Tuesday, in an attempt to beef up the bloc’s defenses against nationalist, populist governments flouting its key principles, Reuters reports:

Germany and Belgium say their proposal would create space for member states to flag rule-of-law concerns early on rather than wait – as at present – for problems to escalate enough in a given country to trigger the EU’s existing mechanism – the complex and multi-stage Article 7.

The EU has invoked Article 7 to investigate concerns that Poland’s nationalist government has undermined the rule of law. The process could theoretically lead to Poland losing its voting rights in the EU, but it has now lain largely dormant for months.

However, according to the proposal, participation in the mechanism would be voluntary for member states and does not carry any sanctions, EUobserver adds:

The mechanism would “allow for a constructive, structured and interactive political discussion between all member states”, a peer review based on “objectivity, non-discrimination, equal treatment of all member states, following an evidence-based and nonpartisan approach”, the joint paper said.

The health and resilience of EU democracies are in focus ahead of European Parliament elections in May, in which pro-EU parties face off against eurosceptics who promote nationalist and populist policies that at times go against the liberal democratic values of the bloc, Reuters adds. 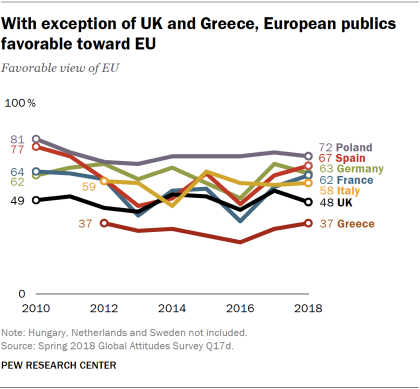