Intellectual humility is a time-honored virtue we can learn to cultivate—and one that’s also vital to a healthy democratic politics, argues David Blankenhorn, president of Better Angels, a citizens group working for depolarization.

At the social and political levels, intellectual humility is a primary democratic virtue, he writes for The American Interest: 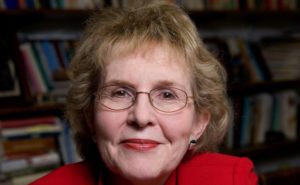 Many political philosophers across the centuries have insisted on its importance. Why? Because, as the political philosopher (and former NED board member) Jean Bethke Elshtain (left) put it, “a responsible politics is one that appreciates the limits to our understanding: We don’t know enough and can, in principal, never know enough to advance epistemological and political certitude.”

Indeed, without those habits and commitments associated with intellectual humility—dialogue based on reason-giving, openness to other views, rational argument in the service of truth, and norms of forbearance, civility, and self-restraint—democracy itself is poisoned and can grind to a halt. 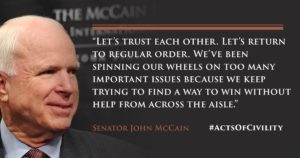 Cindy McCain (above) is marking the first anniversary of the death of her husband John McCain – a former chair of the International Republican Institute – by galvanizing a campaign to bring civility back to politics, The Washington Post reports. Cindy McCain wants to create a public pressure campaign, working from the outside inward, because she believes that lawmakers on Capitol Hill seem too willing to accept this bitter, hyperpartisan era as the “new normal.”

“It has to start with us,” she said, touting the hashtag-ready “#ActsOfCivility” campaign. “I’ll be honest with you, I don’t see anyone else taking up the mantle.”

The political polarization that feeds incivility is the result of cumulative trends, experts suggest.

The current US administration,for example, “isn’t the cause of a lot of the discord that we’re seeing”, says Lilliana Mason, an author and professor at the University of Maryland. But it has served “to bring out into the open these divides that have been accumulating between the parties.”

At a forthcoming event, three U.S. Senators will share their views on what can be done to restore a climate of political civility.

Maria Márkus took special interest in the concept of civil society that was revived by East European dissidents and incorporated it into her account of the fundamental ideals of modernity, notes Martin Krygier, a former Reagan-Fascell fellow.

Considering the relationship between civility, civil society and decency, she saw the former as a condition for the second, but not a part of it, while decency is both an accomplishment and attribute of a civil society in good shape. For her, a decent society is the ideal to strive for, a civil society the way to get there, and civility a necessary step toward civil society. But civility deserves more than the lukewarm approval Márkus bestowed upon it, he writes in The discreet charm of civility, in an effort to bridge the gap between civility, on the one hand, and civil and decent societies.

Civic education has an essential role in combating incivility, argues George A. Goens, author of Civility Lost: The Media, Politics and Education (above). An educated citizenry is essential to understand issues and engage in a rational and civil dialogue to bring people together and engage constructively about democratic principles and values.