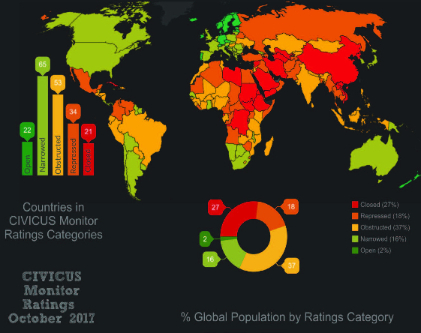 Nearly six in ten countries are seriously restricting people’s basic rights of association, peaceful assembly and expression, according to data released by the CIVICUS Monitor,  which rates and tracks fundamental freedoms in 196 countries. 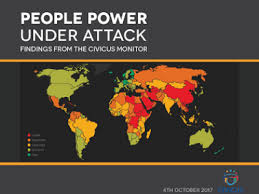 This reflects a continuing crisis facing civil society groups and activists across the world, with the space for civic activism most commonly undermined through censorship, attacks on journalists and harassment of human rights defenders, according to People Power Under Attack 2018, a new CIVICUS report.

“This data is a wake-up call. Given the scale of the problem, global leaders, including the G20 who are meeting this week, need to take the protection of civic freedoms far more seriously,” said Cathal Gilbert, Civic Space Research Lead at CIVICUS. “For civil society, 2018 was a story of states innovating to suppress and restrict criticism by those who dare to challenge people in power.”

The restriction of basic freedoms has become the global norm. But as daunting as the overall picture is, civil society is far from finished, she writes for the Mail and Guardian.

“In recent months for example, decades of struggle in both Ethiopia and Malaysia have provoked changes in leadership which have improved civic space, while Ecuador, The Gambia and Canada have also made recent advances in improving civic freedoms.”

Ethiopia’s Prime Minister Dr. Abiy Ahmed last week held a democracy summit with members of 81 opposition parties to discuss ways of reforming the electoral system, as he pressed on with promises to open up the political arena Reuters adds: 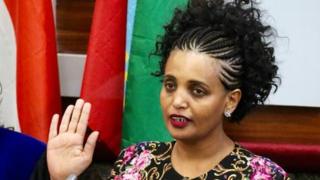 Last week he appointed Birtukan Mideksa (left) as head of the board preparing for the next national elections, scheduled for 2020. Birtukan [a former Reagan-Fascell fellow at the National Endowment for Democracy and a recipient of the A. Philip Randolph Institute’s Bayard Rustin Freedom Award] was one of dozens of opposition figures arrested in the violent aftermath of a 2005 vote – when an opposition coalition stood against the government across the country, then challenged the EPRDF’s victory.

Birtukan promised to make the election board’s work “transparent and trustworthy”. “What Ethiopians endured have prepared us to ask the right questions including through the ballot box,” she told the Fana news agency.

She was the singular object of ruthless persecution and prosecution by the late Meles Zenawi, leader of the Tigrean People’s Liberation Front, notes Prof. Al Mariam. But Birtukan has also been described as the best-equipped person to build Ethiopia’s democratic institutions.

She will be “overseeing not only an election but a transition, from an authoritarian state to a democratic one, a transition to an accountable government,” said Addis Ababa-based political analyst Hallelujah Lulie.

“But, while popular, such a political opening would bring significant challenges,” according to an analysis from Chatham House, the London-based foreign policy think-tank.

“More fundamentally, Dr Abiy has to meet demands for more equitable federalism and autonomy among Ethiopia’s ethnic mosaic, while also protecting the nationally planned and controlled industrialization and infrastructure projects that fueled Ethiopia’s decade-long 8-10 per cent GDP growth and status as the fastest growing economy in Africa,” argues Ahmed Soliman, a Research Fellow with the Horn of Africa Program:

Opening up the EPRDF-dominated system may result in demands for greater freedom from marginalized regions – including direct control of development and industrialization policy. But the consensus around ideologies of ‘democratic centralism’ and the ‘developmental state’ that have shaped the EPRDF’s vision for the future may be threatened should its coalition weaken.

Birtukan was the singular object of ruthless persecution and prosecution by the late Meles Zenawi, leader of the Tigrean People’s Liberation Front, notes Prof. Al Mariam.

A coalition of civil society and human rights groups has called on the government to ensure that the draft Charities and Societies (CSO) Proclamation complies with regional and international human rights norms and standards relating to freedom of association.