There is a concrete way for dethroned incumbents to evade the consequences of electoral defeat, observes Jan-Werner Müller, Professor of Politics at Princeton University. Consider the party of Turkish President Recep Tayyip Erdoğan, which lost the municipal elections in Istanbul last year to an opposition candidate from the main secular social democratic party, he writes for The Boston Review:

Initially the authoritarian leader complained that the defeat had resulted from “irregularities” or outright “theft at the ballot box.” In the end, his party lost a repeat election with even wider margins. While this was celebrated as evidence that even Turkey’s elections could survive manipulation, what happened next was hardly noticed by newly optimistic international audiences: Ankara systematically reduced the Istanbul mayor’s control over resources and access to financing. 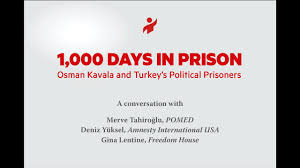 Civil society groups worldwide are calling on Turkey to release prominent Turkish philanthropist and businessman Osman Kavala who has spent 1,000 days in jail without ever being convicted of a crime, DW reports. Kavala is the director of Turkey’s Anadolu Kultur civil society organization, which promotes human rights through art. He has supported art and social projects, and is seen as a bridge-builder between communities in a country that is often fiercely divided.

His imprisonment has become emblematic of the plight of thousands of political detainees unjustly held in Turkish prisons simply for exercising their rights to peaceful opposition and freedom of expression, according to POMED’s Research Director Amy Hawthorne, POMED’s Turkey program coordinator Merve Tahiroğlu; Deniz Yüksel, Turkey advocacy specialist at Amnesty International USA; and Gina Lentine,senior program officer for Europe and Eurasia at Freedom House (see below).

Reversal of Fortune: Turkey’s Unraveling Democracy (above) investigates the power and tactics of populist president, Recep Tayyip Erdogan. From ruthless crackdowns on scores of journalists arrested, academics officially banned from leaving the country, and many of the highest-ranking military officers arrested to the nefarious and failed 2016 coup, the film outlines how Erdogan’s mission has led to the unraveling of liberal Turkey and conflicts with the Gulen movement, coup plotters and Kurdish nationalists.