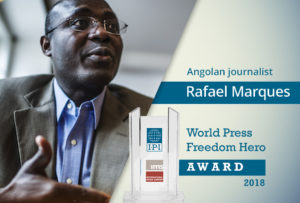 An Angolan court has acquitted investigative journalist Rafael Marques and editor Mariano Bras on accusations of insulting the state, a ruling that Human Rights Watch described as a ‘huge victory for press freedom,’ agencies report:

General Joao Maria de Sousa had acquired land illegally. The article, first published on Marques’ website MakaAngola in November 2016 and re-published by O Crime, edited by Bras, alleged that de Sousa unlawfully acted as a property and real estate developer in addition to his official duties. … If convicted, they faced a three-year jail term.

On Thursday, July 5, Reporters Without Borders asked the authorities to drop all the charges against the two journalists and called for promises toward press freedom to be translated into action.

“By recognizing that these journalists simply exercised ‘their right to inform,’ the Luanda court has sent a strong message of support for the freedom to do investigative reporting, including on cases of corruption involving senior officials,” said Arnaud Froger, the head of RSF’s Africa desk. “We now ask the authorities to overhaul Angola’s very draconian press legislation in order to create a favourable environment for the freedom to inform.”

“That a judge sided with media freedom and independent journalism is a welcome step forward for Angola, a country where most of the media is still under the control of the government and critical journalists are too easily prosecuted for defamation,” said Jodie Ginsberg, CEO of Index on Censorship.