The United Nations has documented at least 37 cases of the forced disappearance or arbitrary detention of Ukrainian officials, journalists and civil society activists opposed to the Russian invasion.

Matilda Bogner, head of the United Nations Human Rights Monitoring Mission in Ukraine, told a news conference Friday that her agency had also received “increasing information” and satellite images of mass graves in the besieged Ukrainian city of Mariupol. Fifteen journalists and civil society activists have also been forcibly detained or have disappeared in or around Kyiv, Kherson, Luhansk and Zaporizhzhia.

Prominent figures in Russia’s opposition circles have been subject to a spate of vandalism on their homes in the last two days, The Moscow Times reports. Yet a group of veteran Russian human rights activists plan to publish an open letter calling on Russia to end its war in Ukraine, declaring it “our common duty” to “stop the war [and] protect the lives, rights and freedoms of all people, both Ukrainians and Russians,” according to The Guardian:

The signatories of the broadest collective statement against the war by Russian human rights supporters to date are some of Russia’s best-known human rights activists, including Lev Ponomaryov (above), the founder of the For Human Rights NGO and a former member of the Duma, Oleg Orlov and Alexander Cherkasov of the Memorial human rights group, and Svetlana Gannushkina, the founder of the Civic Assistance Committee NGO. Several signatories to the manifesto “are not listed for security reasons”.

The initiative is in defiance of Russian authorities’ crackdown on journalists, human rights defenders, and civil society activists in an effort to stifle dissent against the war in Ukraine.

Meanwhile, the head of a pig was left outside the home of Alexei Venediktov, editor of iconic liberal radio station Ekho Moskvy. A sticker of the Ukrainian crest with the phrase “Jewish pig” was plastered to his front door, The Moscow Times adds. The anti-semitic attack on Venediktov, who has Jewish ancestry, comes amid a Russian invasion of Ukraine that Kremlin officials is aimed at “demilitarizing” and “denazifying” its pro-Western neighbor. On Friday President Vladimir Putin claimed that “in Russia there is no place for ethnic intolerance.”

“Having already intensified a crackdown against critics in 2021, the authorities are escalating their witch-hunt even further to punish all anti-war sentiment,” said Hugh Williamson, Europe and Central Asia director at Human Rights Watch. “The government portrays independent journalists and activists as traitors and treats them as a threat to the state.”

Just days after Russia invaded Ukraine, a video of an elderly activist being rounded up by policemen in riot gear went viral, First Post adds. A month on, Yelena Osipova (below) continues to be unfazed. The 76-year-old has become the face of anti-war protests in Russia, where punishment for dissent can earn penalties up to 15 years in prison. 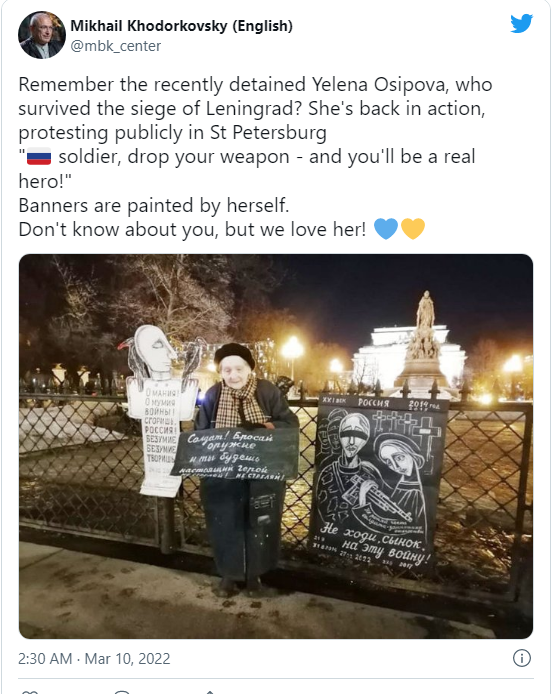