The current stand-off in Ukraine could yet result in military conflict between Russia and the West, analyst Kadri Liik tells the FT’s Gideon Rachman.

“I do not exclude it because it seems to me that President Putin really is serious about his aims in Ukraine,” said Liik, a senior policy fellow at the European Council on Foreign Relations. “At the same time, of course, it needs to be said that overall the domestic political situation is not conducive for going to war. It is evident that Russia’s population is interested in social welfare and things like that. They are not keen to have a war with Ukraine.”

Yet many Russians, subject to a barrage of propaganda and false narratives, maintain delusions that Ukrainians want to be ‘liberated,’ analyst Natalia Antonova writes for Foreign Policy.

In a much-discussed recent piece in POLITICO Magazine, RAND Corporation political scientist Samuel Charap argued in favor of an “unsavory compromise” to address Russia’s troop buildup. But demanding that Ukraine live up to commitments under Minsk without first demanding anything from Russia is both immoral and strategically ill-advised, argue Toomas Hendrik Ilves, former President of Estonia and a guest professor at Tartu University, the national university of Estonia, and David Kramer, director of European & Eurasian Studies at Florida International University’s and a former Assistant Secretary of State for Democracy, Human Rights and Labor.

Pushback and strength are the only things Putin understands and respects, they write for POLITICO Magazine:

Russia backed down in 2015 after Turkey shot down a Russian military plane that crossed into Turkish territory, showing it wasn’t afraid to use force against Putin. The West needs to make clear that the costs of re-invading would be punishing and immediate. The UK has sent several dozen military trainers to help Ukrainian forces. The United States and other NATO allies should do the same, creating a kind of tripwire wherein Putin would know that an attack on Ukraine could implicate NATO personnel on the ground and trigger a major response.

An August poll by the National Democratic Institute found that 76 percent of Ukrainians wanted a “fully functioning democracy,” The Post’s David Ignatius writes. That goal was endorsed by 71 percent of those polled in the east; sentiment in Kharkiv, near the Russian border, matched that in the capital Kyiv. Asked to name a threat to the country, 82 percent of Ukrainians cited “Russian military aggression.”

The slow pace of reform in Ukraine and the disengagement of international partners is emboldening the Kremlin in its efforts to sabotage the government and the democratic process, says former UK Europe Minister Denis MacShane, a witness to the 2004 Orange Revolution and an observer during Ukraine’s 2019 elections. This sense of drift is now being openly exploited by Russia as it seeks to undermine Ukraine’s sovereignty and gradually reassert its influence, he writes for the Atlantic Council. 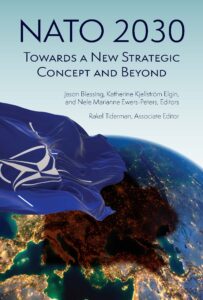 Russia’s invasions of Georgia and Ukraine indicate Moscow’s desire to undermine the post-Cold War security architecture in Europe, according to a new analysis. These invasions, however, were just a prelude to an escalated and consistent Russian effort to undermine the NATO alliance and the wider international order, say Mark David Simakovsky and Michael John Williams.

With the invasion of Ukraine in 2014, the Putin regime was motivated by Russia defining its interests exclusively in opposition to the West and the United States, they write in ‘NATO-Russian Relations in an Era of Russian Aggression’, a contribution to a new book from Johns Hopkins SAIS, NATO 2030 Towards a New Strategic Concept and Beyond:

Russia used the pretext of colored revolutions in Ukraine and Georgia to lay blame on the West for undermining Russia’s interests in its “privileged sphere of interests”….. Russia ultimately chose to trample on the principles it helped to establish in the Helsinki Accords, such as respect for state sovereignty and territorial integrity, peaceful resolution of disputes, individual liberty, and the rule of law.

A ratcheting up of sanctions against Russia could include limitations of the use of sovereign debt for specific investments, targeted sanctions against all technology companies that support the harmful cyberattacks undertaken by the Russian government, as well as a potential clamp down on Kremlin-connected oligarchs’ funds in NATO and EU countries, they add.

What is impossible to ignore are the growing demands among young people in Russia, Belarus and the other ex-Soviet satellite states for greater freedom and democracy. And what the oligarchs around Putin fear most is a new wave of ‘color revolutions’ — such as the ‘orange revolution’ in Ukraine — which would destroy the semi-criminal state structures that protect them, from Minsk to Moscow to Tbilisi, analyst Paul Mason writes for the IPS Journal:

There is a growing belief in western security circles that Putin wants to force the US and its European allies to accept a new, formal, ‘great power’ system, as in cold-war times. This would entail treating as unchallengeable Russia’s influence in the former territories of the Soviet Union, ending sanctions on the country and Belarus, and withdrawing western ‘soft power’ support from democratic oppositions.

“The rhetoric in the Kremlin has really changed … It used to be no NATO membership for Ukraine. But now it’s no NATO infrastructure, so [Putin] is changing what he considers his red lines,” Andrea Kendall-Taylor, a Russia expert at the Center for a New American Security, told a seminar this month.

The West’s democracies must articulate a sophisticated, comprehensive and long-term strategy for consolidating democracy and spurring economic growth in Ukraine, say Stanford’s Michael McFaul and former Ukraine premier Oleksiy Honcharuk. Biden and his democratic allies should create a Donbas Development Fund — a Marshall Plan for eastern Ukraine — whose resources would be released after the war’s end, they write for The Washington Post.

Opinion | In the Russia-Ukraine Conflict, Standing Up to Putin Is Our Only Credible Option https://t.co/U9G7uTCMSj via @politico