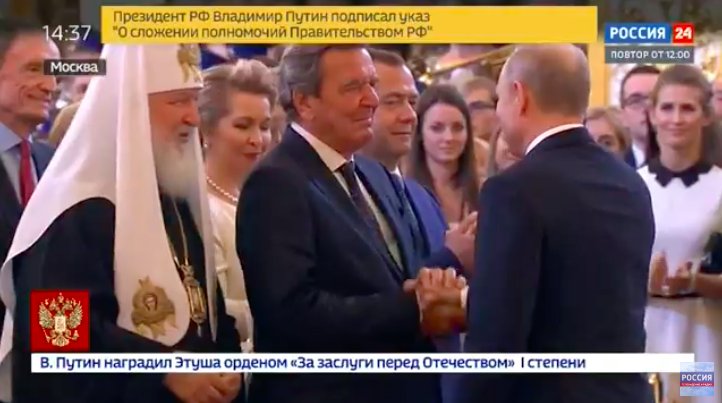 One of Europe’s formerly most respected Social Democrats has three failed marriages, a brand new wife half his age and a widely reported drinking problem. Rumor has it he is also one of the few people in the world with Vladimir Putin’s mobile phone number. Josephine Huettlin writes for the Daily Beast.

The ex-German chancellor Gerhard Schröder reportedly earns a seven figure sum for services rendered to the Kremlin, she adds, while Matthias Warnig, the ex-Stasi spy officer who stood behind Schröder at the pseudo-coronation yesterday, works for Nord Stream, and his salary for 2016 has been reported reported by Rosneft as $580,000:

It’s worth noting that, according to a profile published in the Süddeutsche Zeitung last fall, in Putin’s modern day kleptocracy a geologist who works as a scientific advisor to the Russian Ministry of Resources and has a PhD earned back from the time when scientists in the USSR were taught foreign languages so that they would be able to read Western papers but not converse with their colleagues, can hope to earn around $50 per month.

Putin was sworn in for his fourth term on May 7, extending an 18-year reign that is denounced by his opponents as a corrupt, calcifying authoritarian kleptocracy, RFERL reports.

While Schröder gets feted in Moscow, the Kremlin has reportedly banned Žygimantas Pavilionis (right), a leading member of the Lithuanian Parliament’s foreign affairs committee, from entry into Russia. The move is probably because of his efforts in persuading the parliament to pass a version of the Magnitsky Law.

Bill Browder, author of the bestselling 2015 memoir, Red Notice: A True Story of High Finance, Murder and One Man’s Fight for Justice, speaks eloquently, notably of his Russian lawyer Sergei Magnitsky’s martyrdom following his exposure of corruption at Russia’s highest levels, and the vengeance Browder took by orchestrating passage of the Magnitsky Accountability Act, the National Post’s Barbara Kay adds. Since then, serially passed in many countries, including Canada, the Magnitsky Act has dealt a significant blow to Putin’s kleptocracy by applying sanctions to suspected human-rights abusers worldwide.