Uyghur concentration camps in China’s western Xinjiang province (aka East Turkistan) have a shoot-to-kill policy for those who try to escape, according to leaked documents seen by the BBC (above).

The highly coercive and potentially lethal systems of control used against minority groups in China’s internment camps have been revealed in a giant cache of secret documents shared with the BBC, John Sudworth and the Visual Journalism Team report:

China insists the network of secure facilities built across its far western region of Xinjiang are simply “schools” for combatting extremism to which “students” sign up willingly. But the contents of the leaked Xinjiang Police Files suggest a different story. Taking information from the leaked documents, the BBC has reconstructed one of the camps – the Shufu County New Vocational Skills Education and Training Centre – to reveal the methods used inside. 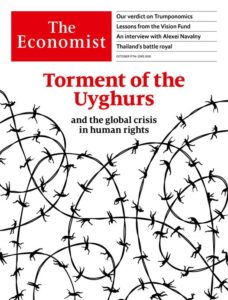 The documents were leaked by a hacker who claimed to have taken them from Chinese police computer servers before passing them to Dr Adrian Zenz of the US-based Victims of Communism Memorial Foundation, reports suggest. Analysis of the data by Dr Zenz showed that in a single county in Xinjiang – Shufu – a total of more than 22,762 residents were either in a camp or a prison in the years 2017 to 2018, accounting for more than 12 percent of the adult population.

The leaked police database files “highlight the role Xi Jinping and other top officials had in crafting the genocidal policies employed in the Xinjiang Uyghur Autonomous Region (XUAR) and demonstrate clearly that Turkic Muslims are detained because of their cultural and religious identity and not for any specific criminal actions,” said Senator Jeff Merkley and Representative James P. McGovern, Chair and Cochair respectively of the bipartisan, bicameral Congressional-Executive Commission on China. ‘The evidence presented is overwhelming and horrific and cannot be ignored or pushed aside by the international community.”

Keep scrolling to find out more.

The report coincides with a 6-day trip to China by Michelle Bachelet, the UN high commissioner for human rights, amid warnings from rights groups and Western governments that her visit could whitewash Beijing’s human rights abuses. A May 20 statement from the Inter-Parliamentary Alliance on China (IPAC), signed by more than 40 lawmakers from 18 countries, accused Beijing of organizing a “Potemkin-style tour” that could damage the credibility of Bachelet’s office.

Rights groups have urged the OHCHR to release a report on which it has been working for more than three years that is based on interviews with camp survivors, consultations with leading scholars, and mounting open-source evidence, such as satellite images and leaked Chinese government documents, RFE/RL reports. But it remains unpublished and there are worries the current trip could be used to mask those findings.

“It’s time for the UN to officially recognize the brave public testimony of survivors, thousands of pages of leaked Chinese government documents, meticulous peer-reviewed research, and hundreds of damning satellite images of concentration camps,” Omer Kanat, executive director of the Uyghur Human Rights Project, wrote in an article for The Diplomat. “The trip will be nothing more than a propaganda exercise.”

The revelations vindicate consistent reports of China’s human rights abuses in Xinjiang/East Turkistan from partners of the National Endowment for Democracy (NED) and represent a serious blow to the CCP’s disinformation campaign which has sought to portray its egregious violations as a propaganda campaign concocted by Western governments and civil society groups.