If the democratic world is going to mount a successful defense against authoritarian states’
efforts to rewrite global norms in their own favor, NATO and EU nations must make up the core of that defense, argues Victoria Nuland, Senior Counselor at the Albright Stonebridge Group and a board member of the National Endowment for Democracy (NED).

If shared values and democratic institutions are truly the bedrock of the transatlantic community, both NATO and the EU need stronger mechanisms for sanctioning members who undercut them, she writes in a contribution to Stronger Together: A Strategy to Revitalize Transatlantic Power, co-authored with Christian Mölling, Director of Research of the German Council on Foreign Relations (DGAP) and Sophia Becker, Research Fellow for U.S. security and defense policy with DGAP’s Security and Defense Program. 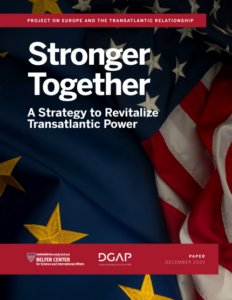 The internal cohesion of the transatlantic community is further challenged by members who have departed from the liberal democratic consensus enshrined in the NATO and Lisbon Treaties, they add in new report from Harvard’s Belfer Center and DGAP.

While the EU does have tools for evaluating and censuring members who weaken their own democratic checks and balances, these have largely been toothless in changing leader behavior because member states continue to receive EU budget allocations, loans and grants regardless of their democratic backsliding. Consequently; 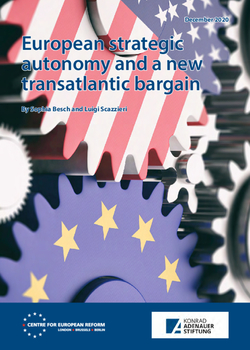 Europeans and Americans face a formidable set of shared challenges, ranging from fighting the COVID-19 pandemic and climate change to countering authoritarian rivals like China and Russia, upholding human rights and nurturing democracy across the world, add analysts Sophia Besch and Luigi Scazzieri.

Europeans need to take on more responsibility for their own security, not because the US is asking them to do so, but because it is in their own interests, they write for the Centre for European Reform:

The bipartisan consensus in the US on countering Chinese influence and limiting military involvement in the Middle East means that future US administrations are likely to continue to shift their focus away from Europe and its neighbourhood. …. However, Washington’s priorities in Europe’s neighbourhood may not always be the same as Europe’s, especially in the Middle East and North Africa.

Illiberal regimes use a wide range of tools across the political, economic, technological, and information domains to undermine democratic institutions and alliances, prevent criticism of their own regimes and governance systems, and establish norms and standards favorable to autocratic rule, notes the Alliance for Securing Democracy. To date, democracies have been slow to adapt to this contest, allowing autocrats to seize the initiative by taking advantage of the openness of liberal systems. By embracing a national strategy to offset autocrats’ recent advances, the United States can reassert the superiority of the democratic model and repel authoritarian efforts to distort the future world order. 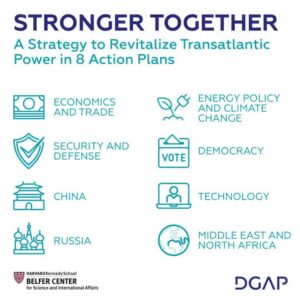 The Alliance for Securing Democracy @SecureDemocracy hosted an event on Linking Values and Strategy (above) with Ambassador Eric Edelman, Distinguished Practitioner-in-Residence at John Hopkins’ Philip Merrill Center for Strategic Studies, Co-Chair of ASD’s Offset Strategy for Democracies Task Force, Ambassador Samantha Power, Anna Lindh Professor of the Practice of Global Leadership and Public Policy at the Harvard Kennedy School, Dr. Kori Schake, Director of Foreign and Defense Policy Studies at the American Enterprise Institute and Jessica Brandt, Head of Policy and Research at the Alliance for Securing Democracy.

Europeans and Americans face a formidable set of shared challenges, ranging from fighting the COVID-19 pandemic and climate change to countering authoritarian rivals like China and Russia, upholding human rights and nurturing democracy. https://t.co/fFKkUGmotf via @cer_eu