Human rights sources have reported that detained Iranian protesters are under severe torture in the notorious Fashafuyeh Prison in Tehran by IRGC intelligence agents. The detainees have been subjected to various kinds of abuse, including scalding with boiling hot water, severe beatings and medical neglect, Iran Human Rights Monitor reports.

Protests will continue in Iran. The broad factors that have caused protests in the past—such as economic, political, environmental, and cultural grievances—continue to be significant. Yet it is unclear whether the protests will lead to more significant outcomes, such as revolution or regime change, argue CSIS analysts Danika Newlee, Seth G. Jones and Joseph S. Bermudez Jr.:

One of the challenges in overthrowing a regime is what Nobel Prize-winning economist Mancur Olson referred to as the “collective action problem.” The central implication for Iran is that would-be Iranian activists face tremendous risks and obstacles. Since regime change is a collective good (everyone benefits) and activism is dangerous and financially costly, everyone’s best move is to stay home and let others act. 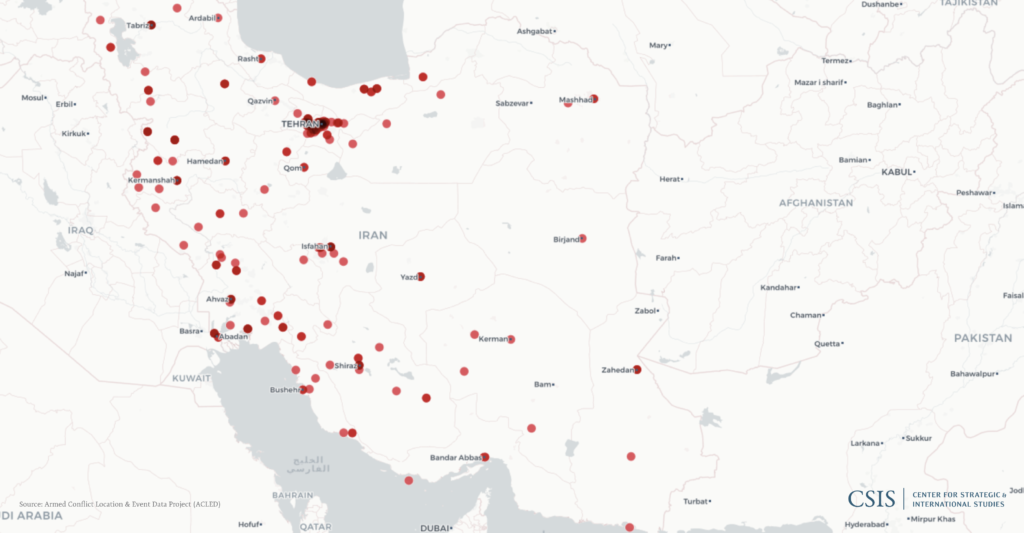 The death of Qasem Soleimani makes the regime’s situation more problematic because Khamenei has steadily replaced allegiance to regime ideology with a cult of personality over the years. If he were to leave the scene anytime soon, the highly factionalized elite—including the IRGC—would have no pivotal authority on which to build a new foundation for internal unity and domestic legitimacy, thus creating an existential risk for the regime as a whole, writes Mehdi Khalaji, the Libitzky Family Fellow at The Washington Institute:

The irony is that Khamenei is a “man of institutions” who firmly believes in limitless, modernized bureaucratization in order to undercut the role of individual actors. Yet his emphasis on fostering an abundance of institutions is not intended to empower the government’s democratic structures, but rather to weaken the potential for independent alliances and strong democratic institutions. ….The danger of concentrating so much power in Khamenei’s hands is obvious: what happens when he is gone? Soleimani was an unparalleled alternative authority, someone who likely gave Khamenei peace of mind that the regime could remain stable when the time for transition came around. Even authoritarian regimes benefit from having such safety valves—figures who can offer guidance during times of crisis and expect it to be followed without resorting to coercive measures.

Moving forward, however, at least two developments might signal growing trouble for the regime, the CSIS analysis adds;

Since protests in Iran in 2018 — at the time the largest in almost a decade — Washington had accelerated efforts to provide Iranians more options on how they communicate with each other and the outside world, a US state department official told the Financial Times:

The US-supported measures include providing apps, servers and other technology to help people communicate, visit banned websites, install anti-tracking software and navigate data shutdowns. Many Iranians rely on virtual private networks (VPNs) that receive US funding or are beamed in with US support, not knowing they are relying on Washington-backed tools.

“We work with technological companies to help free flow of information and provide circumvention tools that helped in [last week’s] protest,” a second state department official told the FT. “We are able to sponsor VPNs — and that allows Iranians to use the internet.”