Despite 16 years of democratic recession, the transatlantic axis remains the “backbone of the Free World,” according to a leading democracy advocate.

Vladimir Putin’s war on Ukraine has shattered the post-modern delusions of the European Union and “stiffened the spine” of its member states, but the defense of freedom demands a strategic approach in which advancing democracy is woven into policy, said Damon Wilson (above), President and CEO of the National Endowment for Democracy (NED).

“We are in a knife fight for freedom,” so solidarity between democracies is essential when China launches a trade war offensive against Australia, for instance, and equally imperative as prospects of democratic breakthroughs emerge, he told the Bush Institute’s David J. Kramer. Transitions don’t arise from external actors’ initiative or direction, but the NED has established a global infrastructure which ensures that “when democratic windows open” it is in a position to offer the assistance local actors demand. And it does so with humility, recognizing that sustainable transitions must be rooted in local agency and ownership, not external instructions or templates.

The Appropriations Committee of the US House of Representatives has released its Fiscal Year 2023 State, Foreign Operations, and Related Programs Funding Bill, allocating $2.8 billion for democracy programs, $200 million above the 2022 level, including $345.7 million for Democracy Fund and $310 million for the NED, $10 million above the President’s budget request. 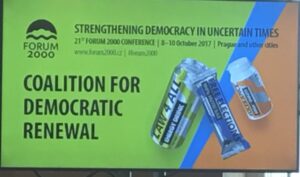 Democratic renewal demands institutional reform, not least to combat corruption and kleptocracy to ensure that democracies are able to deliver the services and public goods that citizens demand, Wilson added. But it also requires a “re-anchoring” of fundamental principles and values – the cultivation of a “democratic culture” that reinforces and sustains resilience.

That is the difference between democracies, which are self-correcting because individuals have agency and the capacity for innovation, and autocracies, which suffer from the institutional brittleness and fragility arising from the stifling of individual freedom, he suggested.

Global trade provides another arena for democratic cooperation and solidarity in the strategic competition with authoritarian adversaries, observers suggest. The cumulative impact of recent global disruptions – from COVID to the war in Ukraine –  has called into question the vision of a globalized economy, Bloomberg’s Bryce Baschuk observes. In response, some US officials are pushing “friend-shoring” — a happy-sounding label for a world divided between free-market democracies and countries that align with the authoritarian regimes of China or Russia.

To the surprise of many pundits, Washington and Brussels have come together more closely on how to deal with China, argues analyst Dan Hamilton with the Paul Nitze School of Advanced International Studies:

There is general agreement that both sides want to work with China where it is in their interest, for instance on climate change, non-proliferation, and in many areas of trade. There is also agreement to address areas where both sides view China as a competitor, such as forced technology transfers, massive subsidization of domestic  industries, and Beijing’s failure to meet its WTO commitments. And there is greater alignment that China seeks to be a systemic rival, for instance by contesting democratic norms and adherence to standards of human rights and rule-of-law norms.

There are as many differences on these issues within the European Union as there are between Europe and America, he adds. Yet there is now a transatlantic frame through which both sides can address the China question.