Latin America has an advanced system of regional organizations conceived to protect and foster democracy, says Miriam Kornblith, senior director for Latin America and the Caribbean at the National Endowment for Democracy (NED). This institutional architecture comprises the Organization of American States (OAS) and the Inter-American System, composed of the Inter-American Commission on Human Rights and the Inter-American Court of Human Rights. A significant development was the approval of the Inter-American Democratic Charter in 2001. The question looming over these institutions and covenants is how effective have they been in defending and promoting democracy and human rights? she asks in Lonely At The Barricades: How to Strengthen the Global Defense of Democracy, a new report from the Wilson Center.

Even in their failures, multilateral institutions can be essential first responders to a democratic SOS. As referees, they “provide a measure of the deviation from norms that societies are experiencing,” she writes, and furnish “guidance and an institutional pathway to close that gap.” Yet without support and sustenance from other state and non-state actors, such institutions will be “out-gunned, out-manned, out-numbered, out-planned.”

The Summit for Democracy is an occasion to ratify the need to forge a principled and normative-oriented commitment to strengthen, renew, and enforce democratic and human rights values globally, including in Latin America, Kornblith (right) concludes:

It is also an opportunity to strengthen cooperation among democratic players and institutions, and a chance to commit to continue providing international support to democratic players,
such as democratic and pluralistic political parties and independent civil society organizations. This would help lend voice, visibility, and support to oppressed individuals and communities in Latin America and across the globe who are suffering from the abuses of governments or illegal actors, and build and strengthen democratic solidarity. 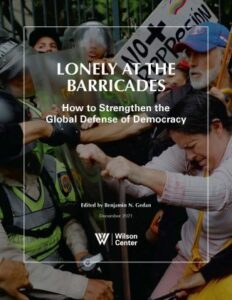 It is vital to open multilateral institutions to civil society, said Lombardo, especially at a time when autocratic states are securing representation on bodies like the UN Human Rights Council. Multilateral fora and institutions will be a key terrain for advancing democratic ideals in the period between next month’s Summit for Democracy and the projected follow-up Summit in 2022, she added.

“We see in Poland, and Hungary, and Turkey a kind of pattern that is replicated in different ways, each of them with a unique story, but replicated in different ways in a number of backsliding democracies around the world,” Baer told the forum. “I think one of the things that is kind of a level up at a 30,000 foot level that is even more concerning in some sense to the long term is that we see people actually challenging in advanced democracies the basic principles of liberalism.”

Lonely at the Barricades, edited by the Wilson Center’s Benjamin N. Gedan, includes The Role of Multilateral and Regional Organizations in the Promotion of Democracy and Good Governance in Africa by Prosper N.N. Addo; Strengthening ECOWAS and AU Capacity to Defend Democracy by Babatunde Olanrewaju Ajisomo; Resetting U.S. and AU Approaches to Democracy Promotion in Africa by Ida Sawyer; Taiwan: A Glimmer of Hope in East Asia by Vincent Chaon; Lofty Rhetoric, Lack of Action on Democracy in Southeast Asia by Ye Myo Hein and Lucas Myers; At the Summit for Democracy, I’m Looking for Authentic Expressions of Urgency, Not Checklist by Daniel Baer; Slouching Toward Illiberalism: Why Democratic Backsliding is an Existential Dilemma for the European Union by Teresa Eder; Globalization and the Inter-American Agenda
by Diego García-Sayán; Latin American Regional Organizations, International Democracy
Assistance, and Democracy by Miriam Kornblith; Conclusion: The Summit for Democracy and the Future of Wilsonianism by Abraham Denmark.  RTWT