….. are identified and analyzed in the most-read essays from the Journal of Democracy, reminding us that 2021 was what JOD calls a year marked by high political drama, economic unrest, and rising assaults on democracy, in which the Journal provided insight and analysis of the forces that imperil freedom. Here are its 10 most-read essays of 2021:

1. Why the Future Is Democratic (April 2021) Christian Welzel: The swelling pessimism about democracy’s future is unwarranted. Values focused on human freedom are spreading throughout the world, and suggest that the future of self-government is actually quite bright. 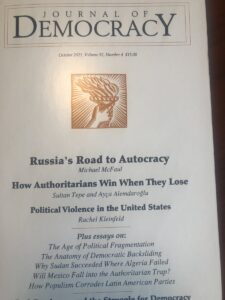 3. Russia’s Road to Autocracy (October 2021) Michael McFaul: Thirty years after the Soviet Union collapsed, Russia is firmly in the grip of an autocrat. Where did Russia’s path go wrong?

5. The Three Faces of the Indian State (January 2021) Madhav Khosla and Milan Vaishnav: India’s Constitution has long seemed stable, but the rise of an ethnic, absolute, and opaque state is changing the constitutional order in momentous and disturbing ways. 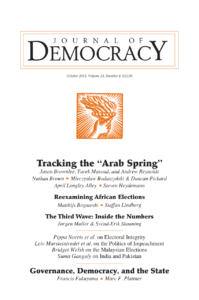 7. Why Strongmen Win in Weak States (January 2021) Roberto Stefan Foa: While analysts of populism have focused on economic woes and “cultural backlash,” a thirst for the restoration of order may better explain the appeal of authoritarian populists in fragile democracies where governance is falling short.

8. The Arab Spring at 10: Kings or People? (January 2021) Tarek Masoud: A decade ago, Arab peoples stood up and sought to replace their rulers with a more democratic political project. But Arab autocrats have a project of their own. Can the people gain ground in the struggle for self-government, or will the rulers bear it away?

9. The Miracle and Tragedy of the 2020 U.S. Election (April 2021) Nathaniel Persily and Charles Stewart III: The covid-19 pandemic nearly upended the U.S. election, but after a rocky primary season changes were made to save it. Alarmingly, however, a large portion of voters have rejected the result. The challenge of overcoming lies about a “rigged” election is great.

10. China at the UN: Choking Civil Society (July 2021) Rana Siu Inboden: Beijing is using red tape, procedural rules, and a little help from its authoritarian allies to strangle NGOs seeking to participate in the world body. 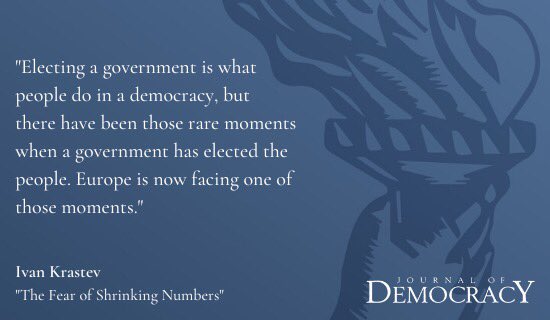