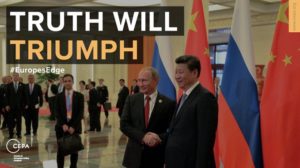 Authoritarian regimes are corrupt in a more fundamental way than liberal democracies because the access to power on every level of state bureaucracy in the former effectively signifies access to wealth accumulation as well, notes Pavel K. Baev, Nonresident Senior Fellow in Foreign Policy at Brookings’ Center on the United States and Europe.

This structural corruption doesn’t necessarily make such regimes more compatible with
one another, and China and Russia provide a perfect example of such incongruity, he writes. Both political systems are deeply corrupt (Russia sank to a new low of 137th place in Transparency International’s 2019 Corruption Perception Index, while China shares 80th place with India), but the stark differences in the backgrounds, motivations, and operational codes of their key elite groups prevent the development of cross-border networks of corruption. RTWT