In today’s ideological competition between illiberal autocracy and liberal democracy, Xi Jinping’s China and Vladimir Putin’s Russia have made major investments in tools for propagating their worldviews and explaining their policies. The United States has not. It’s time to catch up, Stanford’s Michael McFaul writes for the Washington Post:

But analysts Thomas Pepinsky and Jessica Chen Weiss argue that grounding foreign policy in a notion of ideological conflict “is a potentially misguided or even counterproductive strategy because this binary framing between democracy and autocracy makes it harder to find partners abroad, especially in East Asia, in Southeast Asia.”

Beijing’s assertion of what the NED’s International Forum calls sharp power is largely defensive and not aimed at exporting its model or ideology, they contend.

“It’s a rejection of the idea that Western ideas, so-called Western ideas of democracy are universally applicable,” adds analyst Kaiser Kuo. “There’s a sort of cultural relativism … Really, this idea that authoritarianism is held up as not so much a positive good, but as an expedient — the only choice for a country that is still burdened by a really large population, by low levels of education, by an underdeveloped political culture, low levels of civic virtue, low levels of societal trust and these sorts of things.”

China recently announced a new three-year campaign to regulate algorithms used by its tech companies, including an algorithm registration system and a review for ideological risks, according to China Digital Times.

Indeed, such sensitivity to perceived ideological contamination could be construed as further evidence that…..

….Beijing recognizes that human rights and democracy are an ideological challenge. So should Washington, argues Nathan Levine, a China advisor at the Asia Society Policy Institute. 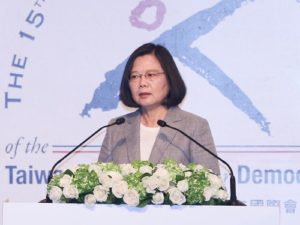 Is Taiwan “the new West Berlin” in a revived Cold War of ideas?

Taiwan stands on the frontlines of defending democracy and will maintain its defenses to ensure nobody can force them to accept the path China has laid down, President Tsai Ing-wen said on Sunday.

In a similar vein, she wrote that Taiwan is “on the front lines of a new clash of ideologies,” in a recent essay for Foreign Affairs. “As countries increasingly recognize the threat that the Chinese Communist Party poses, they should understand the value of working with Taiwan,” she argued. Taiwan’s resilient liberal democracy is both “an affront to the narrative and an impediment to the regional ambitions” of Xi’s ruling Communist Party.

“They should remember that if Taiwan were to fall, the consequences would be catastrophic for regional peace and the democratic alliance system,” Tsai added. “It would signal that in today’s global contest of values, authoritarianism has the upper hand over democracy.”

Taiwan has consolidated its democracy in recent decades and shown itself a responsible international stakeholder, the Post adds. During the pandemic, it quickly became a model for how transparent, democratic governance can effectively curb the spread of a dangerous virus. Under Tsai, the island also offered sanctuary to pro-democracy activists from Hong Kong, an act of solidarity with those staring down the barrel of Xi’s hardline rule.

The story of Taiwan is one of resilience—of a country upholding democratic, progressive values while facing a constant challenge to its existence. Our success is a testament to what a determined practitioner of democracy, characterized by good governance and transparency, can achieve, Tsai added in Foreign Affairs:

Sitting on the frontlines of the global contest between the liberal democratic order and the authoritarian alternative, Taiwan also has an important part to play in strengthening global democracy. In 2003, we established the region’s first nongovernmental organization devoted to democracy assistance and advocacy, the Taiwan Foundation for Democracy. Following the models set by the United States’ National Endowment for Democracy and the United Kingdom’s Westminster Foundation for Democracy, the TFD provides funding for other nongovernmental organizations, international and domestic, that advocate democratic development and human rights.

On the frontlines of the global contest between liberal democracy & the authoritarian alternative, Taiwan established the Taiwan Foundation for Democracy, following the models set by the @NEDemocracy & @WFD_Democracy, @iingwen writes for @ForeignAffairs
https://t.co/tIzAuCndz7