Democracy has many advantages, but its pitfalls include a tendency toward short-term return over longer-term interests, being reactive rather than proactive, and being geared towards internal competition rather than cooperation, according to a new analysis.

It is important, however, not to assume that these trends are inexorable. While there are some structural limitations that undermine the tendency for democracies to plan and act strategically, they are also some inherent strengths and advantages, argues Bryden Spurling, the 2019 Alliance 21 fellow at the United States Studies Centre at the University of Sydney and most recently acting assistant secretary for strategic policy in the Australian Department of Defence.

Democracies can be highly resilient. Their systems are accountable and efficient so they can be very good at maximizing their capabilities when needed. And the competition of ideas in democracies means they can be adaptable and innovative. These are all desirable traits at the strategic level, he writes in The peril of modern democracy: Short-term thinking in a long-term world: 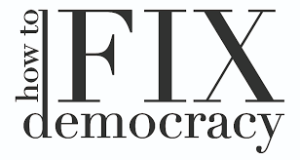 There is a long history of democratic systems proving time and again that they can be effective strategic thinkers and actors when compelled. Some examples of marshalling of resources to achieve long-term political and strategic goals include the New Deal, the First and Second World Wars, the Apollo Space Program and even the Cold War. All these required significant resources and sacrifice on the part of the broader community. Further, all were able to be sustained across electoral cycles and, in many cases, changes of leadership.

Democratic renewal needn’t require wholesale change, however. Relatively easy reforms could create enough space for some long-term ambition, while also helping to change the conversation between citizen and government, he writes for The Strategist:

The Bertelsmann Foundation and Humanity in Action cordially invite you to the NYC premier of the documentary How to Fix Democracy, an extension of their video and podcast series by the same name. Directed, written, and narrated by Betaworks Studio member Andrew Keen, the How To Fix Democracy film is a documentary about the contemporary crisis of liberal democracy.

Unless you can have debates based on a commonly agreed upon set of facts, you cannot have democracy at all, National Endowment for Democracy (NED) board member Anne Applebaum told the Bertelsmann Foundation’s Washington Symposium (above).

The crisis is “bad, deepening, accelerating,” adds Larry Diamond (below), senior fellow at Stanford University’s Hoover Institution and co-editor of The Journal of Democracy, who suggests several steps we can take to reverse the trend, such as ranked choice voting to tackle the two-party system, and spreading “motor voter” laws to increase the number of registered voters.

The film screening will be followed by a discussion with Andrew Keen and Mete Coban, from the UK’s My Life My Say, who appears in the documentary and series. Drinks and light fare will be provided.

Filmed in Europe and the United States, How to Fix Democracy charts the rise of illiberal populism and offers economic, technological, and cultural strategies to save liberal democracy. This movie is a timely reminder that the defense of freedom is the most critical issue facing us in the early 21st century. RSVP