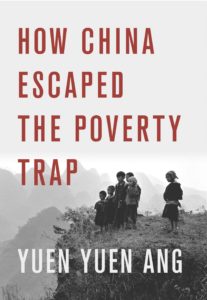 There is a growing fear in the West that developing countries are finding the so-called “China model” more appealing than liberal democracy, notes Yuen Yuen Ang, Associate Professor of Political Science at the University of Michigan and the author of How China Escaped the Poverty Trap. Yet for all of the panic and paranoia over this development, some basic questions remain unanswered. What exactly is the China model?

In reality, different parts of China have followed many different paths to economic and social development over the last several decades. The China model changes depending on where and when one looks for it. More important, it is inaccurate—and indeed misleading—to equate the China model with conventional authoritarianism, she writes for Foreign Affairs:

As I have argued in this magazine, the political foundation of China’s economic success since Chinese leader Deng Xiaoping opened markets in 1978 was not autocracy, but autocracy with democratic characteristics. By reforming China’s bureaucracy, Deng introduced democratic features, specifically accountability, competition, and partial limits on power, into the country’s single-party system. China’s experience in the reform era shows that even a partial injection of democratic qualities into an autocratic system can unleash tremendous initiative and adaptive capacity.

“Western democracies do not need to fear the China model,” Ang suggests. “Instead, they should worry about the widespread misinterpretation of this model by the West, the developing world, and China’s own political elites.” RTWT

Unlike past leaders, Xi has adopted a more ambitious foreign policy, becoming more active in international organizations and expanding Chinese influence through projects such as the Belt and Road Initiative. However, Xi has simultaneously rolled back China’s liberal reforms, imposing stricter regulations on the internet, NGOs, and other aspects of society, the Council on Foreign Relations adds:

In her recent book, The Third Revolution: Xi Jinping and the New Chinese State, Dr. Elizabeth Economy analyzes China’s political and economic reforms of the last five years under the leadership of Xi Jinping and what it means for the rest of the world. Listen to this week’s Asia Unbound podcast, hosted by Alyssa Ayres, to hear more about China’s trajectory under Xi and how the United States can navigate its relationship with this vast nation in coming years.

China is a threat to the liberal world order not because it has anything close to a set of ideas and attitudes that the outside world might be easily able to adopt, and that compete with enlightenment universalist liberal values, but because of its clear stance under Xi of allowing non-Chinese to hold these values, while resolutely rejecting them for itself, argues Kerry Brown, the director of the Lau China Institute at King’s College, London.

Its exceptionalism of course offends Western desires for modernisation universalism. If China succeeds in creating a future with no political reform, but a fully modernised economy, then theories of development will need to be rewritten, he writes for the Economist.

Eight articles on “China in Xi’s New Era” in the April 2018 issue of the National Endowment for Democracy’s Journal of Democracy examine the country’s internal changes in the wake of the 19th Party Congress, its expanding global ambitions.