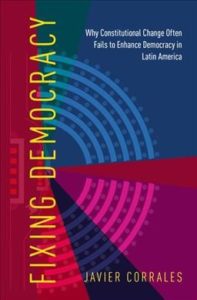 After receding for the past 10 years, populism is making a comeback in Latin America. On June 17, Colombians elected a president from a right-wing populist party. On July 1, Mexicans are likely to elect a president from a left-wing populist campaign of his own creation, notes Javier Corrales, a professor of political science at Amherst College, and author of “Fixing Democracy: Why Constitutional Change Often Fails to Enhance Democracy in Latin America.”

They provide uneven inclusion, by mobilizing previously excluded groups while simultaneously creating obstacles, even hardship, for their opponents. They also openly question, even revoke, institutions restraining the formal powers of the presidency.

Despite their different policy priorities, the movements that are rising in Colombia and Mexico both view the political system in terms of good guys and bad guys, cowboys and Indians. Both see the presidency as the office at the helm of a crusade against certain groups, and thus, both are uncomfortable with checks on presidential powers. These movements may not kill democracy, as some critics contend, but they will strain democratic institutions.

“Electoral rules, institutions of checks and balance, and external factors all matter,” adds Corrales, a contributor to the NED’s Journal of Democracy. “In Colombia, these forces point toward a possible, though not inevitable, de-anchoring; in Mexico, toward entrenchment.” RTWT