The world is witnessing an attack on democracy through the diminution of checks and balances, while authoritarian actors establish “democratic scenery” that includes elections, according to a leading analyst.

Why do Nicolás Maduro, Ortega, Putin, Lukashenko, et al, take the trouble to mount elections that everyone knows are false? asks Moisés Naím, best-selling author of influential books, including The End of Power and the forthcoming The Revenge of Power: How Autocrats Are Reinventing Politics for the 21st Century. Because they need legitimacy, the scarcest of political resources. Which is we need modern public officials to be well-connected with journalists and activists who are denouncing these stealthy, clandestine, opaque takeovers, through which governments claim a democratic vocation, he writes for Diálogo Político, a platform for democratic dialogue in Latin America. 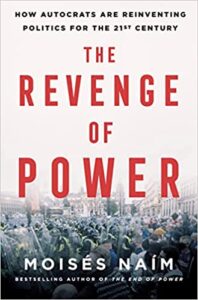 But polarization is like cholesterol: there is good and a bad version, adds Naím, a former National Endowment for Democracy board member:

Such ideas must be contested by searching for consensus, for shared visions, he concludes. RTWT