The authoritarian trend that I predicted over 20 years ago may not be sustainable, as the destabilizing autocracies in Moscow and Beijing themselves become unstable in the face of the Samuel Huntington trap, argues Robert P. Kaplan, a senior fellow at the Center for a New American Security and a senior adviser at Eurasia Group.

The creation of large middle classes can actually be politically destabilizing if governmental institutions do not simultaneously become more efficient and responsive, he writes for the Wall Street Journal. Russia and China are in different situations, Kaplan adds: 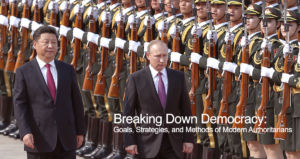 Russia is a rickety house that at some point may crumble. China is sturdier; nevertheless, it could slowly become a compressed pack of social dynamite with less of an outlet for its internal frustrations. It is theoretically possible for Mr. Xi, as president for life, to institute a program of dramatic economic reforms. But doing so would unleash the need and yearning for more personal freedoms, the kind that the regime is moving with its technological thought control to try to eliminate.

The Western liberal order is not in crisis because of Russian disinformation campaigns and electoral interference, says Shlomo Ben-Ami, a former Israeli foreign minister and Vice President of the Toledo International Center for Peace. Western democracies must take responsibility for a crisis that, ultimately, is homegrown – nurtured by its leaders’ own failure to confront effectively the challenges of globalization, he writes for Project Syndicate.

Democratic states and institutions are under increasing strain from a potent combination of external and internal challenges, say Brookings analysts Torrey Taussig and Bruce Jones. These developments are illustrative of a new era of geopolitics, which, at its heart, involves competition over internal political systems. But… Set against these negative trends are more positive developments outside the Western core, they contend:

As Bruce Jones and Michael O’Hanlon have written elsewhere, several powerful and large countries—India, Indonesia, Nigeria, and Brazil, with a combined population of 2 billion—have, for all their admitted troubles, remained democratically stable in recent years. Latin America as a region (minus Venezuela) has survived earlier populist challenges to democracy that many skeptics thought it would not. In Africa, nascent democracy has spread to at least a third of the continent. While much of this democratic progress benefited from outside assistance in its early stages, there is ground for cautious optimism that governance progress in Africa will endure.

Globally, a longer-term perspective paints a moderately positive picture, as there is still far more democracy in the world than there was before the end of the Cold War, Taussig and Jones conclude.

“Western liberal democracies have now exceeded many people’s capacity to tolerate them,” according to Karen Stenner and Jonathan Haidt, writing in Can It Happen Here?, a collection of essays that assess susceptibility to creeping authoritarianism, PS reports:

Their analysis of a survey conducted at the end of 2016 found “about a third of white responders across 29 liberal democracies proved to be authoritarian to some degree.” That large chunk of the population is predisposed to support authoritarian leaders in times of real or perceived threat.

The upsurge of illiberalism has inspired a stream of books with titles like “How Democracies Die,” “Can It Happen Here?,” “The Road to Unfreedom,” “Why Liberalism Failed,” and “It’s Even Worse Than You Think,” the New Yorker’s David Remnick writes:

Yascha Mounk, the author of the most recent addition to this library of anxiety, “The People vs. Democracy: Why Our Freedom Is in Danger & How to Save It,” offers a trenchant survey from 1989, with its democratic euphoria, to the current map of autocratic striving….Mounk, who teaches government at Harvard, points out that one reason for the increasing indifference to democratic rule and the rising enthusiasm for authoritarian alternatives, particularly among young people, is the widening historical distance from any direct experience of the horrors of German Fascism or Soviet Communism.

“Mounk emphasizes that history laughs at complacency and illusions of permanence,” Remnick adds. “Athenian democracy lasted two centuries, the Republic of Venice a millennium, but both eventually faced decline and dissipation.”

At a forthcoming National Endowment for Democracy forum, William Galston and Mounk discuss the factors fueling populism’s rise and how democracies can effectively respond. The event will also celebrate the appearance of newly published books by each of these authors: Galston’s Anti-Pluralism: The Populist Threat to Liberal Democracy (above) and Mounk’s The People vs. Democracy: Why Our Freedom Is in Danger and How to Save It.

Author, The People vs. Democracy: Why Our Freedom Is in Danger & How to Save It

Twitter: Follow @ThinkDemocracy and use #NEDEvents to join the conversation. Copies of the books will be available for purchase at the event. All cameras and media must register with NED public affairs. Please email press@ned.org to register as a member of the press.