An exiled Uighur leader called for more concerted international pressure on China to end its mass detention of the ethnic group as he received a US award. Dolkun Isa, president of the World Uyghur Congress, which says it represents the interests of Uighurs both under Chinese rule and overseas, said the award offered a morale boost to the group which Beijing has branded a terrorist organization, Agence France Presse reports. 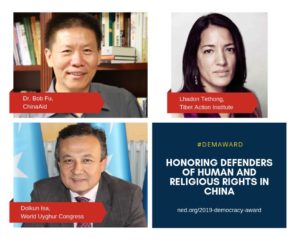 “Maybe this award will bring more support for the Uighur cause from the international community,” Isa told AFP at the ceremony. “Some countries like the US and European countries are speaking out. But many Muslim countries continue not only their silence but supporting the Chinese repression toward the Uighurs. It’s a real disappointment and shame because we are Muslims facing religious persecution,” he said.

At a Capitol Hill event, the bipartisan, Congressionally-funded National Endowment for Democracy gave its 2019 Democracy Award to the World Uyghur Congress, the Tibet Action Institute and ChinaAid.

The 30th anniversary of the Tiananmen massacre occurs when observers around the world “have come to the realization that China’s dramatic economic growth has not produced a more liberal and open country, but rather a more closed and increasingly repressive authoritarian state that poses a growing danger to democracy in the world,” said NED President Carl Gershman.

The late Chinese dissident and Nobel Laureate Liu Xiaobo foresaw and warned about this danger, for which he paid a heavy price, he added. His message to us was that it is in the vital interest of all democratic countries and freedom-loving people to rescue “the world’s largest hostage population from enslavement.”

Within that hostage population, none are more threatened than those represented by our three awardees – the Tibetan and Uyghur peoples, who are victims of what the Dalai has called “cultural genocide,” and religious believers among the Han majority, especially the House Church movement and the rural Christian underground, said Gershman.

The fact that each of these groups faces a common existential threat to its culture, language, identity, and faith reveals what is the central feature of the Chinese state – that it sees anything it cannot control as a threat to its power, he cautioned.

US House Speaker Nancy Pelosi also addressed the NED event after she had met more than 30 survivors of the Tiananmen massacre.

Several of those protests’ former student leaders, who had travelled to Washington from around the country, were hosted by Pelosi – the United States’ most powerful Democrat – in her offices and included prominent human rights campaigners Wang Dan, Zhou Fengsuo and Wang Juntao, the South China Morning Post reports.

“It was a profound honour to meet with the courageous, inspiring veterans of Tiananmen today,” Pelosi, for decades a supporter of calls for improved liberties and human rights in China, told the South China Morning Post. It fell on America to remember their heroism, she said, “because China still shamefully tries to hide the history of the atrocity it inflicted on its own people 30 years ago”.

More than 180,000 people attended this year’s Tiananmen massacre vigil in Hong Kong, according to the Hong Kong Alliance in Support of Patriotic Democratic Movements of China. Many participants will also join a rally on June 9 against Hong Kong’s new extradition law. 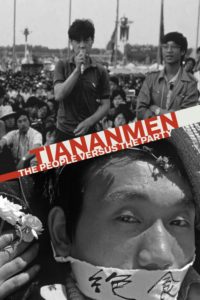 The events in Tiananmen Square were an inflection point that created China as we currently know it – an authoritarian capitalist state, observers suggest.

“The June 4 incident changed the direction of Chinese history,” Zhang Lifan, who was a scholar at the Chinese Academy of Social Sciences in 1989, told The Associated Press. “The narrative that China would grow strong and normal, become a stable country through a process of political reform, was destroyed.”

Under the rule of current President Xi Jinping, the government has tightened control over everything from religion to the internet in an apparent bid to make the Communist Party central to the future of China, VOA adds.

“I don’t think that in the foreseeable future there is the possibility for another mass movement against the regime, because the system of control is so complete,” said Andrew Nathan, a professor of Chinese politics at Columbia University.

One of the primary reasons that U.S. and Chinese visions of security differ is that China is not just any type of challenger—it is a challenger with an autocratic, one-party political system, according to Hal Brands, the Henry A. Kissinger distinguished professor of global affairs at Johns Hopkins University, and Charles Edel, Senior Fellow at the United States Studies Centre at the University of Sydney.

It is simply impossible for Beijing’s rulers to feel fully secure in a system dominated by liberal values and a liberal superpower, because they fear that this system will undermine their own authority at home, they write for Foreign Policy:

Similarly, the autocratic nature of the Communist Party ensures that Chinese officials will constantly be tempted to channel internal discontent outward, to manufacture legitimacy by pursuing a nationalistic foreign policy, and to place antagonism with the democratic world as a core tenet of its beliefs—as the Chinese government has increasingly done over the past three decades…. As long as the United States and its allies have institutions such as a free press interested in investigating corruption, as long as the United States supports concepts such as democracy and human rights, and as long as the United States maintains its alliances in Asia, Chinese leaders will feel threatened.

“Sino-American antagonism is less a result of those factors than it is a product shifting power dynamics and the ingrained nature of the regime,” they conclude.

PBS is to schedule TIANANMEN: THE PEOPLE VERSUS THE PARTY (above), a day-by-day account of the dramatic seven weeks during which students and ordinary Chinese citizens made a stand for more freedom – a protest with ramifications that would shape the future of the modern superpower. Directed and co-written by Ian MacMillan, the film premieres Tuesday, June 25, 9:00-11:00 p.m. ET (check local listings) on PBS, PBS.org and the PBS Video App, according to reports:

Unfolding with the drama of a political thriller, the film investigates how a peaceful student protest calling for liberty ended seven weeks later in carnage, documenting the many turning points when the violence could have been avoided but tragically was not.With never-before-seen Chinese television archival footage and exclusive interviews with key insiders – from protest leaders and students to politburo members – TIANANMEN: THE PEOPLE VERSUS THE PARTY reveals the scale of the 1989 protest, its aims, the military crackdown and the aftermath…..Featured interviewees include Perry Link and Andrew Nathan, editors of The Tiananmen Papers, and student leaders Shen Tong, Wuer Kaixi, Wang Dan, Rose Tang and others.