Opposition leader Juan Guaido, who declared himself interim president of Venezuela in January, said he will return to the country “despite the risks.” Guaido defied a court travel ban last week by traveling to Colombia, Reuters reports (HT:CFR) to assist international efforts to deliver humanitarian aid to Venezuelans. 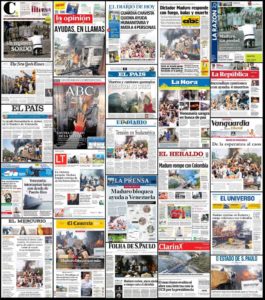 A solution to the crisis requires greater international engagement, which includes pressure on Cuba, analyst Moisés Naím [a former National Endowment for Democracy board member] said Monday. The Communist regime in Havana has been able to plunder Venezuela for many years without consequences.

U.S. Sen. Marco Rubio, a fierce critic of Maduro, warned Tuesday that tyrants often believe they’re invulnerable — his first, indirect reference to his own cryptic tweeted images over the weekend showing dictators during their brutal downfalls, the Washington Post adds.

The potential collapse of Maduro’s regime poses a threat to Cuba, which relies on Caracas for about 28% of the island’s oil needs. Venezuela’s opposition says the government’s longstanding oil-barter agreement with Cuba is irrational, coming amid an economic free fall at home, and benefits a Communist dictatorship it reviles, the Wall Street Journal adds:.

If Guaidó, who is recognized by the U.S. and about 50 other countries as Venezuela’s legitimate head of state, wrests control of the country from Maduro, his government is expected to quickly halt the oil shipments. The result would be power outages, fuel shortages and government spending cuts that would cause the Cuban economy to shrink by as much as 10%, according to Omar Everleny Perez, an independent Cuban economist in Havana.

Ted Henken, a Cuba expert at Baruch College in New York, said the end of bargain-basement-priced oil for Cuba would cause a seismic shift on the island. “Cuba has limped along for the past 15 years thanks, basically, to the relationship with Venezuela,” he said.

Maduro still has the loyalty of senior officers, whom his administration has courted with promotions and lucrative contracts, the New York Times adds. But the embarrassment of having scores of low- and middle-ranking security forces defect to the other side was not without political repercussions, said David Smilde, a sociologist who studies Venezuela at Tulane University.

“We haven’t seen images like that since the fall of communism,” Mr. Smilde said. “It makes it clear how much fear there is among soldiers and security agents who feel that they now have to flip and come across the border.” 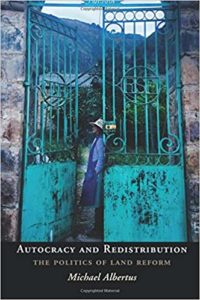 Lessons from other transitions to democracy around the world can shed light on how such an agreement could be forged in Venezuela, notes Michael Albertus, an associate professor of Political Science at the University of Chicago, and author of Autocracy and Redistribution: The Politics of Land Reform. The best shot for democracy is for the mainstream opposition to bring along the moderate elements of the Chavismo movement while leaving out Maduro in a way that will be stable while also delivering enough justice to satisfy the population as a whole, he writes for Foreign Policy:

Moises Rendon, associate director & associate fellow of CSIS Americas Program, testifies (above) before the House Committee on Foreign Affairs Subcommittee on the Western Hemisphere, Civilian Security, and Trade on “Made by Maduro: The Humanitarian Crisis in Venezuela and U.S. Policy Responses.”