Tunisia’s transition to democracy has proved more resilient than some expected. The largely peaceful run-up to the polls has raised hopes the country will achieve its first handover of the presidency from one elected leader to another, considered a key hurdle in the development of young democracies, The Guardian reports:

Hailed as the Arab spring’s only success story, Tunisia’s revolution nearly descended into chaos in the years to 2013 after several leftist leaders were assassinated, allegedly by Islamic extremists, deepening the polarisation between the country’s Islamist and secular factions. Yet it pulled back from the brink, helped by a coalition of civil society groups who brought warring parties together and were later awarded the 2015 Nobel peace prize.

“A large part of it is also due to the [political] leaders themselves,” said Sarah Yerkes, a fellow at the Carnegie Endowment for International Peace. After a close legislative election in 2014, Essebsi and his political rival, the Ennahda [aka Nahda] president Rached Ghannouchi, struck an improbable agreement to share power, widening the tent to include smaller parties in 2016.

“These men were older, more experienced, and were both extremely committed to democracy, they saw the importance of it for Tunisia and decided it was best for the country to work together.”

Days before campaigning began for Tunisia’s presidential election, Nabil Karoui, a television tycoon and the populist frontrunner in the poll, was arrested and thrown in jail. His supporters blame Youssef Chahed, the prime minister and a competitor in the presidential race, for the decision to resurrect the 2016 allegations of tax evasion and money laundering, The Financial Times adds:

Mr Karoui has denied all the charges and, unless convicted, will be able to stand in the September 15 poll, even if he is still in jail. His arrest and the presence of more than 20 other candidates on the ballot paper have added to the uncertainty about who will secure the top job in the Arab world’s only democracy. In a line up that also includes Tunisia’s defence minister and a senior Islamist leader backed by the largest party in parliament, few would predict who the next president will be — a rarity in a region where political change through the ballot box remains unusual.

“Unlike everywhere else in the Arab world, it will be up to the people to vote and select the next president,” said Youssef Cherif, a Tunis-based analyst at the Columbia Global Center, part of Columbia University.

The country held its first-ever televised presidential debate ahead of elections on September 15, France24 adds. Twenty-six candidates are running for the presidency, including the current prime minister and a former president. In Foreign Affairs, Allen James Fromherz looks at the future of Tunisia’s democracy (HT: CFR). 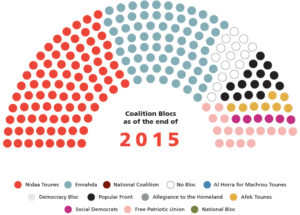 In 2016, Islamist political party Ennahda decided to abandon preaching and focus on politics, precipitating an identity crisis within the party, notes Hamza Meddeb, an assistant professor at the South Mediterranean University.

It faced new challenges, including rethinking the role of Islam, addressing its own neutralization as a driver of socioeconomic change, and managing its core supporters while appealing to a broader electorate. Ennahda’s shift to politics has forced it to rethink its ideological framework and rebuild its legitimacy based on arguments other than religion, he writes for the Carnegie Middle East Center:

Of the Arab countries that rose up against dictatorship in 2011, Tunisia is considered the only successful example of a democratic transition, The FT adds:

Unlike in the other elections held since 2011, the bitter polarisation between Islamists and their secular opponents that almost scuppered the transition in its early years has largely faded, a development commentators see as positive. Nahda, the party rooted in the country’s Islamist movement and the biggest force in parliament, has emphasised its moderate credentials and willingness to compromise with its political rivals. Years of austerity and tough economic conditions have meant that voters are less focused on ideology and more on declining living standards.

“We have been saying that ideology is not the issue,” said Said Ferjani, a senior Nahda leader. “You have to deliver to citizens their needs and to deliver prosperity. Even among our base, ideology has faded and people want jobs, better healthcare and better education and infrastructure. The rest has become increasingly irrelevant.” 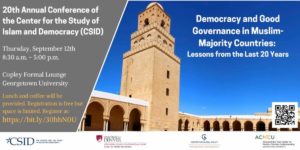 Tunisia and the Enduring Hope of Democracy in the Arab World is the subject of a roundtable* at this week’s Center for the Study of Islam and Democracy (CSID) conference at which Carl Gershman, President of the National Endowment for Democracy, will deliver the keynote address,