Kaja Kallas remembers the stories of when her mother, Kristi, then a baby, was deported to Siberia in a cattle car with her own mother & grandmother so it is little wonder that Estonia’s prime minister is one of Europe’s toughest voices against Russia for its war in Ukraine, The NYT’s Stephen Erlanger reports:

Along with Latvia and Lithuania — countries also annexed by the Soviet Union — her country and its fellow Baltic States are some of the smallest and most vulnerable in Europe. But their recent history has given them special standing and credibility as they press Europe’s larger countries to take a hard line against President Vladimir V. Putin of Russia and to keep faith with Ukraine and its struggle for freedom.

The West “should not be intimidated by anything Russia is saying or threatening,” said Kallas. As Lennart Meri, Estonia’s first post-Soviet president, observed, “Europe is not a geography — it’s a set of values and principles.” 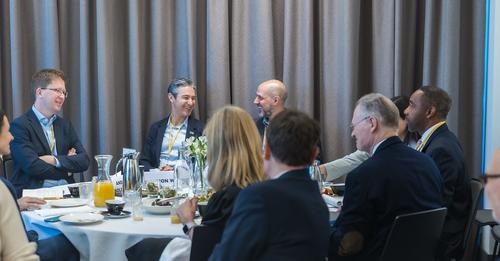 We need to revive the concept of a Europe whole and free with no grey zone between Russia and those of its neighbors aspiring to join the transatlantic community, said Damon Wilson (second left), President & CEO of the National Endowment for Democracy (NED). The international order should be realigned to defend Ukraine while developing new forms of solidarity among democracies, including those of the global South, he told the ICDS-International Centre for Defence and Security’s Lennart Meri Conference.

Western countries must do everything in their power to constrain Russia’s ability to wage war on Ukraine and pursue its aggressive foreign policy, argues Sabine Fischer, a senior fellow at the German Institute for International and Security Affairs. Sanctions and the supply of weapons to Ukraine are essential elements of their approach, she writes for The Economist:

While this policy is not aimed at regime change, a weakening of the Russian state and the Russian economy increases the possibility of such change. In this case, the West needs to be ready for major new challenges. One way to prepare is to offer support to democratic politicians, independent journalists and civil-society figures exiled from Russia. Doing so would mean that they can play a positive role if they are able eventually to return to their country under different political conditions.

The war in Ukraine may yet be caught up in the vicious circles of electoral politics found in democracies, notes analyst Jackson Janes. Both [the US and Germany] will need to stand on common ground in combining eﬀorts to secure transatlantic consensus in this new chapter of confrontation between democracy and autocracy. Such challenges will test the strength of transatlantic ties, as has been the case in past decades, he writes for the German Marshall Fund.

The West “should not be intimidated by anything Russia is saying or threatening,” said @kajakallas. As Lennart Meri, #Estonia’s first post-Soviet president, said “Europe is not a geography — it’s a set of values & principles.” https://t.co/PC1JM6KZqd

Many international observers still assume Russia is a rational actor and believe policies of appeasement can bring the conflict in Ukraine to an end. Nothing could be further from the truth, argues Anders Aslund. In reality, neither bleeding heart liberals nor diehard realists truly understand Vladimir Putin, he writes for the Atlantic Council:

They fail to recognize that he is an authoritarian kleptocrat who does not care about Russia’s national interest and is focused instead on his power and wealth. He hides this self-interest behind a façade of revisionist Russian nationalism that helps secure popular support for his criminal rule. As I have argued in my book, “Russia’s Crony Capitalism: The Path from Market Economy to Kleptocracy,” Putin’s personal politics combine authoritarianism and kleptocracy. He needs war not to make Russia great again but to increase his popularity and justify his repressive domestic policies.

In an era in which international conflicts implicate questions of ethnicity, national identity, language, and history, culture is not just caught in the crossfire. It is itself a battleground, argues Suzanne Nossel, the CEO of PEN America. Russian President Vladimir Putin has targeted his campaign against Ukraine not just to seize territory or subdue resistance but to subsume Ukraine culturally, linguistically, and territorially into Russia, denying its existence as a sovereign, independent nation, she writes for Foreign Policy:

Although the histories of Russia and Ukraine are indeed intertwined, their societies, traditions, and artistic forms have distinct and unique threads that have endured over time and have grown stronger during Ukraine’s independence since 1991. In contrast with Russia’s near one-party state—where Putin has reigned since 2000—Ukraine has, at last count, 349 separate registered political entities vying for influence and has had five different presidents over the last 20 years.

Today, as we see with Russia’s invasion of Ukraine, front-line figures in the battle for freedom and democracy matter more than ever, notes the Alliance of Democracies Foundation. It hosts the next Copenhagen Democracy Summit on 9-10 June 2022 in an effort to unite political, business and media leaders, democracy activists and advocates, to bring fresh ideas to stem the authoritarian advance and put democracy back on the front foot. 9 June 2022 – 10 June 2022 01:00 – 23:45. RSVP

UNDP Ukraine presents the results of the ‘Civil Society for Enhanced Democracy and Human Rights in Ukraine’ project (below) implemented with the financial support of the Danish Ministry of Foreign Affairs.