The war in Ukraine “is an inflection point,” said Jonas Parello-Plesner, executive director at the Alliance of Democracies. “It is not just Ukraine’s fight but a fight for liberal democracy,” he told the Copenhagen Democracy Summit.

The war is being fought differently from other conflicts because “it’s a war between systems,” said Nataliya Gumenyuk of the Public Interest Journalism Lab. It is precisely because Ukraine is a democracy that the war has promoted unprecedented cooperation between government and civil society, she told The Atlantic’s Anne Applebaum at the NED’s 2022 Democracy Award forum. 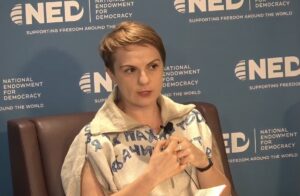 The war can’t be won if operations are too centralized, which is why local officials and politicians – formerly fierce rivals – are working together across partisan lines, Gumenyuk (right) added. Ukrainians remain steadfastly committed to democracy not because “it is in our blood,” but because of the resilience cultivated over the past eight years and a collective determination ‘in the words of a NED logo, to chose our own destiny.”

“Compassion fatigue has already made people just not want to consume sad things anymore – it’s too much, it’s too heavy,” she said. And further: “We felt that during the Donbass war,” Der Spiegel reports.

“Compassion fatigue has already made people just not want to consume sad things anymore – it’s too much, it’s too heavy,” @ngumenyuk told the @NEDemocracy “We felt that during the Donbass war,” @derspiegel‘s @samelou reports https://t.co/uy5fVCJAQC

The war will eventually allow Ukraine to finally “escape from the zone of transition,” said Oleksandra Matviychuk of the Center for Civil Liberties. Russia had politically persecuted representatives of civil society when it occupied the Crimea and Donbas, but her center’s activists were completely shocked when they witnessed the “sheer murder” of the victims of atrocities in Bucha and elsewhere. 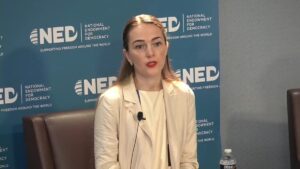 Matviychuk (left) draws inspiration from the tradition of Soviet dissidents and her experience at Euromaidan, which confirmed that “there are no guarantees” except that “you know there are people who will always resist – the issue is fundamental human solidarity.”

“We are fighting for democratic choice… and defending the values of the Free World,” she added, stressing the need to break the cycle of impunity Russia has enjoyed despite a series of atrocities in Chechnya, Syria, Libya, and now Ukraine.

Victory for Ukraine entails not only regaining sovereignty over all occupied lands, said Daria Kaleniuk (below) of the Anti-Corruption Action Center. It must also guarantee accession to the European Union, not lease because Ukraine is fighting a war in defense of the very values the EU claims to embody.

‘This would be a very clear political signal to Putin: Ukraine will never become a part of Russia’ https://t.co/NrxKrBltVc via @ips_journal

A clear political commitment from the European Union could force Putin to recalculate his policy and reconsider his agenda. That’s why it’s very important from a geostrategic and security point of view to let Ukraine become a candidate country, say Kyiv-based analysts Alyona Getmanchuk and Leonid Litra.

Candidate status could also create a momentum for reforms in Ukraine – maybe the most powerful in its history, they write for the IPS Journal. It would be much easier for all pro-reform forces, both in the government, parliament, and the civil society, to push forward reforms due to the candidate status. Without the candidate status, or by granting only a so-called potential status, this would undermine the reform agenda and would certainly encourage Putin.

The war will lead to “a different Ukraine,” Kaleniuk told the NED forum, but each citizen has to contribute since the lesson of the war is that freedom and democracy are never granted. “Our victory in Ukraine depends on the support of every single American who believes in dignity, freedom, and humanity.” 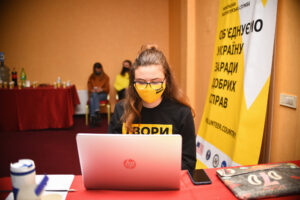 Ukrainians “are learning democracy by doing,” said Anna Bondarenko (see video above) of the Ukrainian Volunteer Service, which has mobilized some 100,000 volunteers since the war began. She spoke of an “amazing moment” when people shifted from an initial reactive approach to the war to forging local coalitions and identifying strategic priorities.

“While the whole country is now mobilized against” the Russian invasion, post-war civil society “will be mobilized for a better Ukraine,” she said.

This is “not a regular run of the mill war,” said U.S. Senator Jim Risch (R-Idaho), ranking member of the Senate Foreign Relations Committee. It is “exactly” a struggle for freedom like 1776, he told the NED event, echoing Gumenyuk’s comments. Ukraine’s people are “fighting for the same thing – freedoms that will be woven into the fabric of Ukraine never to be given up,” said Risch, who presented the NED award to Gumenyuk and Matviychuk.

It is fitting that all four award recipients are women, said Amb. Melanne Verveer, the Executive Director of the Georgetown Institute for Women, Peace and Security, who presented the award to Kaleniuk and Bondarenko. Ukrainian women have been at the forefront of efforts to build civil society and to nurture sustainable democratic institutions, she observed.