On paper, she was officially enlisted as a seamstress due to restrictions on women’s military employment, the National Democratic Institute notes. In reality, Andriana Susak served as an assault trooper on the front lines against Russian occupation in eastern Ukraine, even through the first five months of her pregnancy. Invisible Battalion (2017), the first documentary film about the experiences of Ukrainian women at war, follows six female soldiers and veterans with similar stories that represent the broader, often overlooked role of women in this conflict. 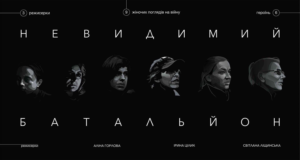 Please join NDI for a screening of the documentary film Invisible Battalion followed by a discussion with veterans and members of the Invisible Battalion project, Mariia Berlinska, Andriana Susak, Yulia Semihailova, Кateryna Lutsyk, Yuliia Mykytenko, and Olena Maksymenko. Produced by Berlinska, Invisible Battalion is currently advocating for the recognition of women’s contributions to the Ukrainian military, equal employment opportunities, and a range of social issues including the prevention of sexual assault and improved mental health services for active and veteran servicewomen.

8th Floor (Please check in at ground floor reception) Lunch will be served.

RSVP here by Friday, October 4 or to Megan Tingley at mtingley@ndi.org

The National Democratic Institute – a core partner of the National Endowment for Democracy – is a nonprofit, nonpartisan organization working to support and strengthen democratic institutions worldwide by promoting citizen participation, openness and accountability in government.