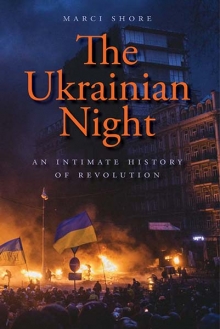 Marci Shore’s strikingly innovative The Ukrainian Night was prompted by her sense of how little Ukraine’s 2014 revolution was understood, notes Peter Pomerantsev, a director of the Arena Program at the London School of Economics.

Shore identifies “a scale of revolutionary behavior through which the individual is transformed, and which opens the way for society to have purpose again,” he writes for the American Interest:

The Ukrainian Night raises a series of nagging questions, Pomerantsev adds: What does it mean to be a nation in a time of globalization? How can one embrace both the multi-ethnic, multi-lingual reality and a coherent polity? How does one generate a discussion of progress in an age of ultra-relativism, where everyone has their own version of the truth?