@ZelenskyyUa‘s simple presence makes Kremlin ideology seem senseless. Born in 1978, a child of the U.S.S.R., speaks Russian… A Jew, he reminds us that democracy can be multicultural, @TimothyDSnyder writes for @NewYorker https://t.co/vKgFum1Bum

In Ukraine, power is transferred through democratic elections: when Volodymyr Zelensky won the 2019 Presidential election, the sitting President accepted defeat, notes Yale University’s Timothy Snyder. Russia is brittle: it has no succession principle, and it’s unclear what will happen when Vladimir Putin dies or is forced from power. The pressure of mortality confirms the imperial thinking. An aging tyrant, obsessed by his legacy, seizes upon a lofty illusion that seems to confer immortality: the “unity” of Russia and Ukraine. 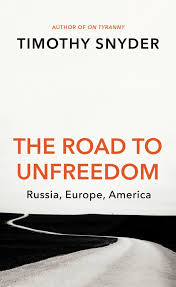 Ukraine is a post-colonial country, one that does not define itself against exploitation so much as accept, and sometimes even celebrate, the complications of emerging from it, he writes for The New Yorker:

Its people are bilingual, and its soldiers speak the language of the invader as well as their own. The war is fought in a decentralized way, dependent on the solidarity of local communities. These communities are diverse, but together they defend the notion of Ukraine as a political nation. There is something heartening in this. The model of the nation as a mini-empire, replicating inequalities on a smaller scale, and aiming for a homogeneity that is confused with identity, has worn itself out. If we are going to have democratic states in the twenty-first century, they will have to accept some of the complexity that is taken for granted in Ukraine.

The contrast between an aging empire and a new kind of nation is captured by Zelensky, whose simple presence makes Kremlin ideology seem senseless, Snyder adds. Born in 1978, he is a child of the U.S.S.R., and speaks Russian with his family. A Jew, he reminds us that democracy can be multicultural. RTWT