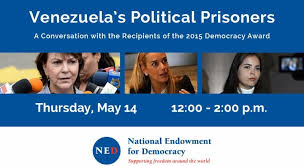 Venezuela was once a model nation, prosperous, advanced, democratic. Did Antonio Ledezma ever imagine that it could slide into tyranny and poverty — not just poverty but starvation itself?

“No, honestly. I thought we would have more and better democracy, not go back to a time that seemed to be gone forever: a time when we had strongmen as leaders, when people would blindly follow the man on the horse, a false messiah who gave populist speeches, claiming to be predestined. Chávez was really good at that,” he tells The National Review’s Jay Nordlinger:

Maduro is much less good at it, much less talented. “He is an activist,” says Ledezma, “formed and educated by the Castro brothers. He’s an agitator, very limited intellectually.” According to Ledezma, and many others, the Castro brothers chose Maduro as their vehicle for leverage over Venezuela. The dictator Gómez, continues Ledezma, “didn’t know how to read or write. But he knew that he didn’t know, and because he knew it, he surrounded himself with brilliant people” — people who knew about petroleum, for example, people who knew about state finances. Maduro, on other hand, “is ignorant but thinks he knows. Therefore, he has surrounded himself with people who are unqualified, and the result is a disaster.”

Mayor Ledezma has been honored with the National Endowment for Democracy’s 2015 Award (above), by the European Parliament, and by other bodies, Nordlinger adds. RTWT